Recently a mate asked how many times I had been to Britain and or Europe, and, when I answered ’20’ he said I should write a book.

I’m not in the mood for that, and for those who follow this website, you will be aware that I regularly post stories from those travels.
But, with time on my hands, with this ‘Chinese flu’ keeping my wife, Marie and I largely housebound, I thought I would file a 20 part series on those trips, under sub-headings.
TRIP SIX
OCTOBER/NOVEMBER 1993
PURPOSE OF TRIP
Threefold: 1 To inspect accommodation and attractions ahead of my 1994 Kangaroo Supporters’ Tour 2 To walk the newly opened Grand Union Canal Tow Path from London to Birmingham 3 To file stories on rugby league in the UK, including the Kiwi tour, which had Howie Tamati as coach, and Gary Freeman as captain.
COUNTRIES VISITED
England, Wales.
SCENIC HIGHLIGHT
North Kent Downs, Canterbury to Dover.
HISTORIC HIGHLIGHT
Canterbury Cathedral
FIRST MEAL THAT I CAN RECALL
Pizza at restaurant near Victoria Station, London.
MOST MEMORABLE MEAL
Pork chops at The Globe Inn, Linslade, Bedfordshire.
FIRST PUB/BAR STOP
Zetland Arms, South Kensington
BEST PUB/BAR STOP
The Fisheries Inn, in the London Borough of Hillingdon, where I chatted to Aussie, Bill Greville from Harbord, Sydney, who was working nearby, in IT.
ONE SPORTING EVENT
First Rugby League Test, Great Britain v New Zealand, Wembley Stadium. Brits won 17-0, with Jason Robinson making a stunning debut for the home side, scoring two tries. The other try was scored by former Welsh rugby union international, John Devereux. Mal Reilly coached Britain, with Garry Schofield the skipper. (See ‘Drunken Kiwi Steals Hearts at Wembley’ on this website).
EVENT OTHER THAN SPORT
Fox hunt (that’s not sport) in Cheshire, near the home of British league international, Eric Hughes and his wife, Jacky.
DIFFERENT PLACE
The ruins of Whitby Abbey on the East Cliff, above Whitby Harbor. Author, Bram Stoker set scenes of his novel, ‘Dracula’ on the 199 steps that led up through the old town,  to the graveyard and Church of St Mary, beside the Abbey. Prominent English sports photographer, Andrew Varley, who has a beach house at nearby Sandsend, took me on the tour of Whitby.
MOST UNUSUAL EXPERIENCE
Steering a narrow boat along the Grand Union Canal, from Castlethorpe Wharf to Stoke Bruerne in Northamptonshire, after a long lunch at ‘The Navigation’ pub, with visiting publican, Colin Johns from Bedfordshire and canal boat engineer, John Maloney. ‘Maloney’ offered me a lift for the short leg to my accommodation, ‘The Waterways Cottage’. Thank God, not much can go wrong cruising up a canal.
FIRST THING OF NOTE ON THE TRIP
A walk on the first leg of the Grand Union Canal, from Little Venice, Paddington to Alperton braving sheet lightning and heavy rain along the way, and being ‘forced’ to take cover in the Grand Junction Arms pub. (See ‘Grand Union Canal Walk’ this website). 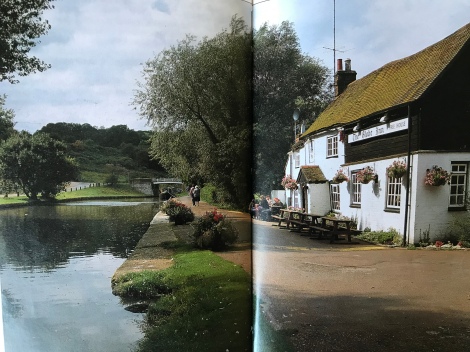