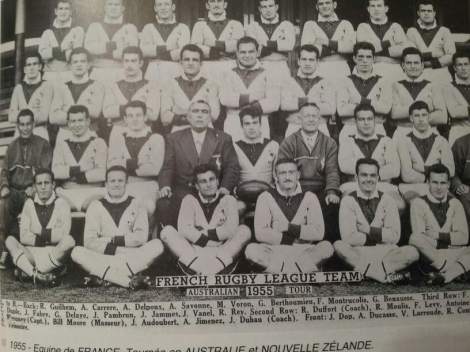 We acknowledge that Brisbane were forced to make some late changes, losing the likes of international second rower, Kel O’Shea to injury (replaced by Norm McFadden), but the home side still fielded a formidable outfit. 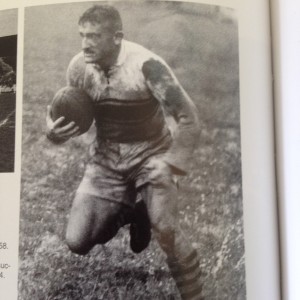 JUNE 11
Australia thoroughly deserved their 20-8 victory at the Sydney Cricket Ground, but we believe we can square the series in Brisbane.
Our hooker, Rene Moulis shaded Australia’s dual international, Ken Kearney 18-17 in the scrums, but our forward rivals, led by Duncan Hall and Roy Bull, were too strong in the rucks.
Dropped passes at crucial stages proved costly for our side, but we still scored two brilliant tries – a sign of better things to come, we hope. I am sure the crowd of 67,748 was entertained
Keith Holman’s try for Australia was against the run of play, when we looked certain to score.
Our first try was simply brilliant, and came from a break made by centre, Roger Rey from Lyon, a late inclusion for Teisseire. Roger cut between Australian centres, Harry Wells and Alex Watson and sent Merquey away at top speed. Jacques passed inside and winger, Ducasse gathered the ball on the bounce, and had too much pace for the cover defence.
Our prop, Guy Delaye fractured his hip and was admitted to hospital, leaving us with 12 men for much of the match.
I thought referee, Darcy Lawler allowed the Australians to stand off-side too often, but I acknowledge the better team won.
JUNE 10
The Courier-Mail’s Jack Reardon has described the Australian pack as the best in years, and has tipped the forwards to pave the way for victory.
Reardon described Duncan Hall as the greatest forward in his time, and we are not ones to argue with such an assessment.
We believe our forwards can at least hold the Australians, and that our backline will be smart enough to cement victory.
Reardon watched our boys train this week and commented that the handling was equal to the artistry of the 1951 team.
The Test was declared a sell-out ages ago.
The challenge awaits us.
JUNE 7
The Australian media have doubted the wisdom of bringing ‘midget’ centre, Claude Teisseire to these shores, but I can assure you, we will have the last laugh.
Claude may be small in stature, but he has dancing feet, and a keen eye for his support players.
Respected league journalist, Tom Goodman refers to Claude as ‘Tom Thumb’, but we prefer to call him ‘Tom Terrific’.
Claude played all three home Tests against the 1952-53 Kangaroos, and he held his own against the likes of Noel Hazzard, Col Geelan and Harry Wells.
We have chosen Claude and of course, Jacques Merquey, as centres for the First Test at the SCG, against the Vic Hey coached Aussies.
JUNE 5
We know we have the talent, but results are what count and today’s 16-9 loss to Southern Division in Wollongong has the potential to damage morale ahead of next weekend’s First Test in Sydney.
I still have confidence in our ability, but, as I say, results determine success.
Today the conditions were miserable – frequent showers and a cold, driving wind. There were 52 scrums, far too many.
Tempers flared on occasion, and that is to be expected, given the circumstances.

Now we must keep a cool head preparing with the battle with the Kangaroos.

JUNE 4.
Beaten again at the SCG, but thunderous applause from the crowd of 50,448 was music to my ears.
New South Wales won 29-24, but the loss of our hooker, Rene Moulis with 14 minutes left, when we led 22-18, was a turning point, in a fluctuating match, which was not one for the feint hearted.
It was a big match for NSW with the great Clive Churchill making his 100th representative appearance.
Both teams threw the ball around in the true spirit of ‘rugby 13’, and we lost nothing in comparison to our rivals in what was a grand spectacle.
I do not wish to lessen the merit of the NSW victory under the coaching of my old friend, Vic Hey.
But I think if the match had ended in a draw none of the spectators would have regretted it.
At times our players brought back memories of the tour of 1951.
Thanks to the hard work of coaches, Rene Duffort and Jean Duhau our team had been transformed in a week.
Andrew Ducase and Maurice Voron were exciting on the wings and lock, Christian Duple gave an intelligent display in the middle as well as kicking accurately, landing six goals from eight shots.
But the star of the match was our centre, Jacques Merquey and I was flattered to hear what former Australian selector and 1929-30 Test halfback, Joe ‘Chimpy’ Busch had to say about him.
Busch said: “What a beauty. He (Merquey) is the most brilliant centre the game has seen since (Queenslander) Tommy Gorman was in his prime as captain on my tour.”
JUNE 3
It is our intention to lobby the International Board for changes to the current ruck rules, which allow the dummy half to stand a yard behind the man playing the ball, and all other players almost in line with the dummy half.
We contend the current rules allow spotting and prevent open play.
At present the best movements come from broken play.
In our last domestic season we experimented with new concepts which ensure the forwards are further apart, and also insist that the dummy half passes the ball every time.
I know New Zealand and Britain have tried different things, but Australia seems happy with the status quo.
We will see what the International Board has to say in August.
JUNE 1
Today we have had a much needed victory – 29-27 over Riverina at Narrandera, an area where rugby league and Australian rules seem to enjoy equal popularity.
I am sure the crowd of 9,000 enjoyed the contest, which was allowed to flow by referee, Jerry Lane.
Narrandera is a nice town on the Murrumbidgee River and the locals made us feel right at home.

We have arrived in Perth and it is strange to see four goal posts on many large ovals instead of the rugby posts we are accustomed to in France.
Our players are excited about the challenges ahead, despite a demanding club and representative schedule in Europe.
We understand that Western Australia is not a rugby league stronghold, but there are many players from New South Wales and Queensland who have moved here to live. 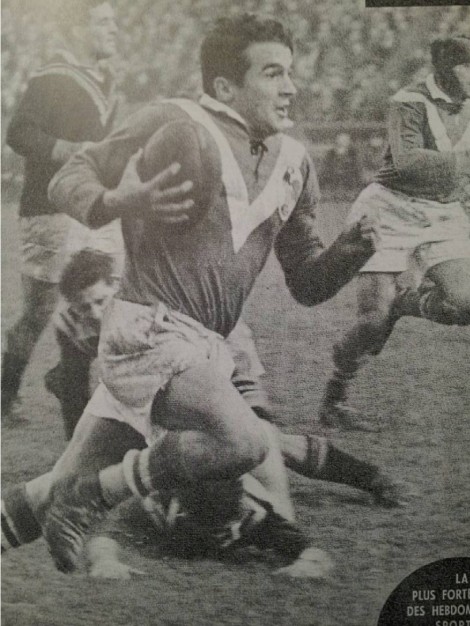 One response to “The TOUR Diary: France in Australia, 1955”