Easts’ 1983 grand final hero, Wayne Lindenberg, 28, confirmed he would not play for the Tigers in the new season, after announcing his ‘retirement’ from the code during Queensland’s tour of England in the northern hemisphere autumn.
After scoring two tries in Queensland’s 40-2 win over Wigan at Central Park, Lindenberg told team manager, Kevin Brasch he had played his last match, with the remaining fixture against Leeds to be staged on a Saturday, when his religion prevented him taking the field.
A Toowoomba product, Lindenberg made the initial break for Easts’ two second half tries in their 14-6 win over Redcliffe in the ’83 Brisbane grand final.
He played six matches for Qld between 1978 and ’83, and there is little doubt he would have been a sensation if he had taken up a Sydney contract.
Souths Magpies’ coach, Bob McCarthy was reappointed Combined Brisbane coach for the 1984 National Panasonic Cup mid-week knock-out competition, after guiding the side to the semi-finals in ’83.
Newly appointed New Zealand Test coach, Graham Lowe, was invited to coach an Oceania Selection to play a Northern Hemisphere combination in Paris in April, to celebrate 50 years of league in France. France celebrates 80 years of the 13 man code this year.
Australian director of coaching, Peter Corcoran was named manager, with Brisbane Souths centre, Hubie Abbott, a player with extensive experience in France, appointed tour ‘co-ordinator’. 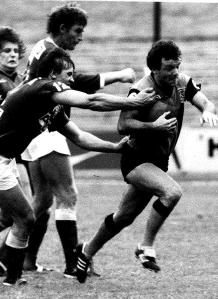 Great Britain were to tour Australia in ’84 and Queensland skipper, Wally Lewis, who would go on to captain his nation that year, tipped a tight series.
Lewis and younger brother, Scott, played for English club, Wakefield in the northern winter and they were impressed with the British selectors’ enthusiasm for youth in the national squad, after relying too much on veterans in previous series.

One response to “FLASHBACK: January 1984”