‘HAGAN’S HEROES’ they were dubbed after the Toowoomba Clydesdales breathed new life into the Bulimba Cup inter-city competition with a shock 17-13 win over Brisbane at the Athletic Oval, Toowoomba.
The credibility of the grand old competition had been thrown into doubt after Brisbane belted Ipswich 66-5 at Lang Park in the opening fixture of the 1970 season.
With former Australian centre, Bob Hagan as coach, the Clydesdales took the field against Brisbane believing they could match their rivals on the score of fitness, while also having faith in the famous Darling Downs’ style which made Toowoomba a Mecca of rugby league in Australia back in the 1950s.
Hagan, a publican in Toowoomba in 1970, used all his knowledge, gained from playing stints for Easts (Brisbane), Canterbury (Sydney) and Huddersfield (England), to prime the Clydesdales for victory.
One of Toowoomba’s stars was future Brisbane Broncos chairman, Paul ‘Porky’ Morgan, a convert from rugby union.
Morgan, who had struggled to play first grade league for Norths and Wests in Brisbane, monstered the Brisbane pack.
‘What he did to Brisbane is just no-one’s business’, wrote The Courier-Mail’s Jack Reardon.
Morgan scored a try and kicked three goals, while the Clydesdales other try scorers were wingers, Doug Muir (a professional sprinter) and Pat McCarthy.
Morgan was well supported by fellow forwards, Ted Irvine (from Dalby) and Joe Murphy, whose defence threw the Brisbane attack into disarray. Centres, Graham Tucker and Ron Beauchamp and five eighth, Peter Lawton showed class in attack.
Hagan said that ‘outside of Sydney’, he had never seen anyone train as hard as Morgan, Irvine, Lawton, Murphy and hooker, Dave Owens.
Toowoomba forward, Danny Ryan was lucky not to be sent off by referee, Henry Albert after he felled Peter Luppi with a stiff arm tackle.
Halfback, Johnny Brown (knee) was a late withdrawal from the Brisbane side, his place in the starting side going to Gary Dobrich, while Doug Stapleton came onto the bench.
Meanwhile QRL president, Senator Ron McAuliffe announced the formation of a ‘Ways and Means Committee’, given the task of formulating ways to beat New South Wales.
The committee members were: Former Australian captain, Tommy Gorman; former Test centre, E.S. Brown; Courier-Mail league writer and former Kangaroo tour vice-captain, Jack Reardon; leading Brisbane coach, Bob Bax; Ipswich administrator, Jim Finimore and Lang Park Trust member, Jim Slaughter.
“Our league feels Queensland will be considered a second rate football state by New South Wales until we can beat them on the field,” McAuliffe said.

In the 1970s Qld won only two matches from the 29 contested, and drew two. In 1980 State of Origin football began. 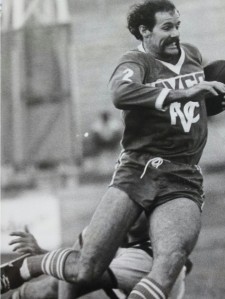