To the movies to see ‘Birdman’. Very good, and one cannot accuse Michael Keaton of vanity. Photographer mate of mine in England, Andrew Varley, has extended his empire from Leeds United, to include Middlesbrough, as official ‘snapper’. Surely one of them will be promoted to Premier League in the near future. Radio announcer, John McCoy recalls the violence he saw on the terraces at Leeds United’s ground, Elland Road when he attended a match while covering an Australian rugby league tour in the 1980s. The violence in rugby league was confined to the pitch.

‘Irish Shed’ merchandise shop on Stafford Road has shut. Always thought it was a bit ambitious trying to sell Galway Gaelic Football jerseys in a state where everyone wears the Maroon of the Queensland State of Origin side.

Spend a big part of the day writing Kel O’Shea (former Australian rugby league forward) obituary for The Courier-Mail. Speak to his wife, Margaret, who says she ‘lost him’ a few years ago because of dementia. She is a ‘Ten pound Pom’ from Dagenham in Essex. Kel was 81 when he passed away this week.

Learn of the death of former Courier-Mail editor, Harry Gordon. I have his book ‘An Eyewitness History of Australia.’

Walk to Grange Forest and on the way an Asian lady cycles by – at great speed – with her fox terrier tied behind. I don’t know how the dog managed to keep up, with those little legs. Giant dog turd in middle of path. Great citizens. Don’t you love it when people pick up the excrement, but soon after, drop the plastic bag. It is a new litter scourge.

Former Brothers’ teammate, Laurie MacBeath contacts me wanting a dvd of 1976 Brothers v Penrith Amco Cup match in which we both played. Good luck! Channel 10 has since thrown out all Amco Cup tapes, and I do not know of anyone who recorded the game – which we won, by the way. Laurie says he always thinks of me when he sees an old Aunty Jack episode. What on earth does he mean?

Laurie Lawrence is on Macca’s ABC show. Laurie is so ‘alive’ and his enthusiasm is infectious. An ‘early’ Australia Day BBQ near Kedron Brook features a home made water slide down the creek embankment, and men in sombreros.

Robbie Slater writes that Tim Cahill is our greatest ever footballer – all codes. Won’t go there, except to say that, once again, it illustrates the chip on the shoulder mentality of many soccer people.

Mike Colman writes in The Courier-Mail that former league star, Wendell Sailor made little impact in the 2003 World Cup. Unless I am mistaken Wendell made more metres than any other player in the tournament, and was used by the Wallabies, largely as a battering ram.

It is 40 years to the day since Marie and I first met at Seagulls Leagues Club, West Tweed Heads. Tonight she watches the tennis and I watch the cricket. How romantic. 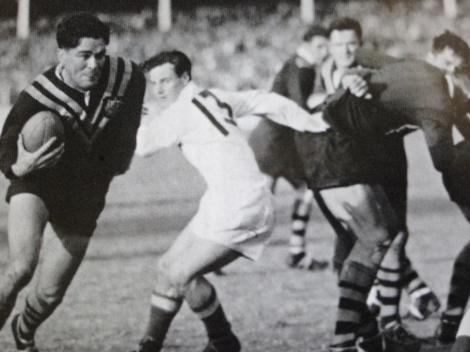 Kel O’Shea breaks from a scrum in a Test against Great Britain in Sydney in 1958.