Learn of the death of former Brisbane Souths’ prop, Col Thompson. Col, known as ‘Coach’ because of a television ad in which he portrayed a footy coach, was an advertising guru, as well as a sports commentator for the old Radio 4IP. He also took rugby league supporters’ tours to Britain, France and New Zealand. One of his tours stayed at the same Auckland hotel as me, when I covered the Kangaroos’ 1985 tour. His tour members mixed well with a group of of Kiwis from the South Island, who had attended the Bledisloe Cup Test on the Saturday, before going to their first live league match the next day at Carlaw Park. The general consensus was that they enjoyed the league more than the union, even though the Kiwis lost the league thanks to a last minute try by John Ribot.

The Sunday Mail carry yarns remembering the start of the Super League War 20 years ago. What a time! The first I heard of News Limited’s  planned takeover of rugby league was a wink and a nod from former Brisbane representative prop, Gary Grienke when I attended the Australia v Great Britain Third Test at Elland Road in Leeds in November, 1994. Gary was coaching London Broncos and had inside information. But the war was officially declared, you might say, in March, 1995, at the kick-off of the ARL season. I was covering the Crushers v Raiders match at Lang Park when I heard that scores of players had already signed with the rebel group, a number of them playing in front of me that day. From there, football became secondary to the off-field mayhem.

Australia beat New Zealand by seven wickets in the World Cup Cricket final today, and it is hard not to get emotional thinking about the passing of Phil Hughes. David Warner goes overboard about how much the players will get on the drink to celebrate the win.

My brother, Jeffery (Tweed Heads based) and I have a long chat and recall TV series ‘My Name’s McGooley. What’s Yours’ and how one of the chief characters, Wal, on his arrival home from work, would sit down, and his wife, Rita, would go straight to the fridge to get him a can of beer. The liberated 60s!! 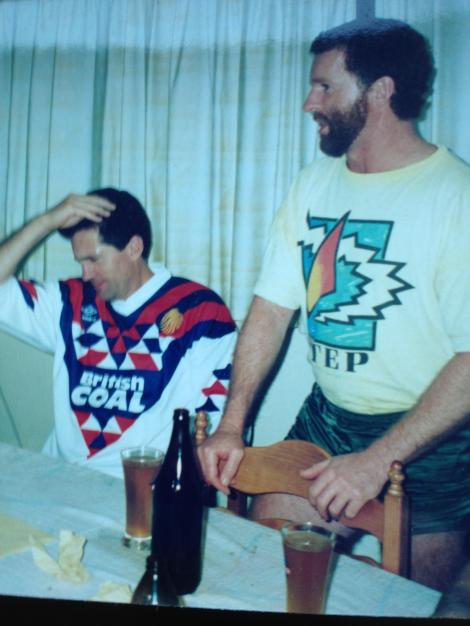 My brother, Jeffery, has his say as the beer goes flat from the XXXX tallies.