Bennett, who took Souths to Brisbane premiership glory in 1985, had wanted to continue coaching the Magpies at club level, but the QRL insisted he concentrate on his state duties, which also encompassed a director of coaching role.

Then 36, Bennett made it clear he never wanted to turn his back on week to week club duties, and the QRL had not been upfront with him when he took on the state role.

The Canberra deal would see Bennett as assistant to the incumbent, Don Furner in 1987, before taking the reins completely in 1988.

Queensland Rugby League chairman, Bill Hunter, was unimpressed, and suggested Bennett might lose the State coaching job in 1987, something which left Bennett nonplussed.

“What’s so different about a coach going to a ‘Sydney’ club instead of a player?” Bennett asked.

As things transpired, Bennett remained Queensland coach in 1987, but he quit the Raiders’ job to be inaugural coach of the Brisbane Broncos in 1988.

At the same time as Bennett was announcing his Canberra move, Brisbane Easts named former Queensland forward, Shane McNally as new coach for the ’87 season, with Shane Richardson in charge of the reserves and Vince Budd as coach of the thirds.

McNally won a premiership with Easts in 1983, the same year he toured England with the Arthur Beetson coached Queensland side. 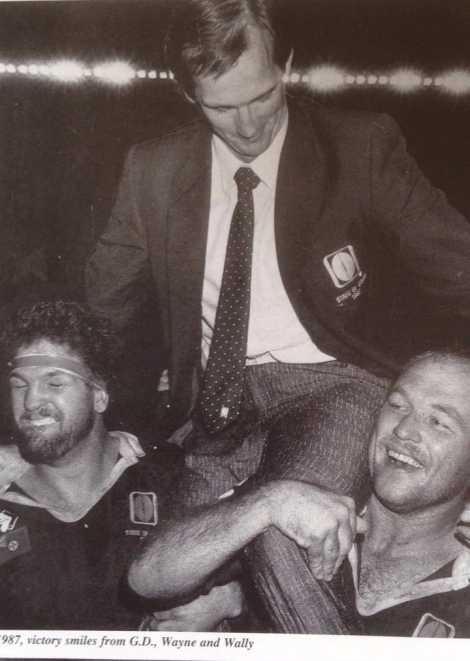 Wayne Bennett chaired from the field by Greg Dowling (left) and skipper, Wally Lewis after the 1987 Origin series triumph.

Richardson would go on to become one of the code’s top administrators.

Second rower, Gavin Jones, a teammate of McNally’s at Easts and in the Queensland side in ’83, suffered a suspected broken arm playing for North Sydney against Balmain in a play-off for fifth spot in the 1986 NSWRL premiership.