Australian skipper, Wally Lewis was heavily targeted by St Helens’ players in the seventh match of the 1986 Kangaroo tour of Britain and France.

Three times Lewis was hit in back play by players from the Alex Murphy coached St Helens’ outfit at a packed Knowsley Road, with the final score of 32-8 to Australia not doing justice to the home side’s effort.

Australia led only 14-6 at halftime, with a 70 metre intercept try to winger, Dale Shearer relieving pressure for the ‘Roos at just the right time, as Saints mounted dangerous attacking raids.

The Kangaroos paid a heavy price with prop, Steve Roach dislocating his elbow (attempting a high shot on Saints’ Test lock, Chris Arkwright) ruling him out of the Second and Third Tests against Britain, after he turned in a magnificent effort in Australia’s 38-16 First Test win at Old Trafford.

Second rower, Bryan Niebling was Australia’s man of the match against St Helens, scoring a try from a deft Paul Dunn pass, and tackling himself to a standstill.

St Helens tried to beat Australia with swift ball movement, but the tourists’ were up to the task, with coach, Don Furner rating it the best defensive effort of the campaign.

Prop, Tony Burke, only named in the side following the suspension of Australian import, Pat Jarvis, led the way for the St Helens’ pack.

Arkwright, in particular, used Lewis for target practice. The grandson of former British Test forward, Jack Arkwright, Chris played for England against Wales in 1984 and then played two Tests for Britain against the touring Kiwis in 1985. He did not feature in the ’86 Ashes campaign and did not play any more international football.

Referee, Fred Lindop issued a number of cautions, but there were no dismissals.

Footnote: I covered the match for the Telegraph newspaper in Brisbane, and later, back at the team’s Dragonara Hotel in Leeds, I bumped into Wally Lewis in the lift.

Wally was a sorry sight, with a fat lip and a black eye.

He caught me by surprise as he entered the lift, and trying to make small talk, I put my foot in it.

“No diving this time, Wally,” I blurted, a reference to the fact Wally was somewhat notorious for milking things for a penalty.

Wal just shook his head, as I quickly realised he didn’t see any humour in my comment. 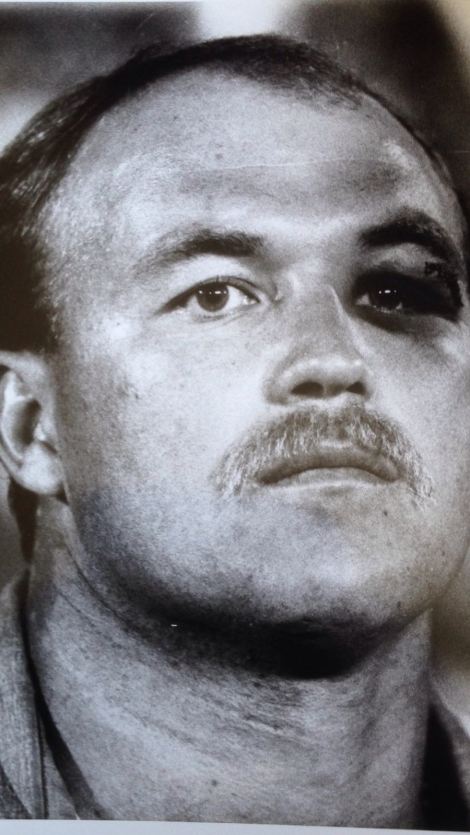