‘Old Farts’ journos lunch at Plough Inn, South Bank. Former Lord Mayor, Sallyanne Atkinson, an ‘old’ journo, is there. We chat about State of Origin II in 1989 when Sallyanne was invited into the Queensland dressing room, and was ‘confronted’ by several nude players. She took it all in here stride (the fact they had no strides). Also in attendance at The Plough were the likes of Barry Dick, Col Woods, Ken Blanch, Gary Evans, Jack Craig, David Bray, Sylvia de Costa-Roque, Mike O’Connor, Stu Riley, Glyn May, Phil Hammond, Bruce McMahon, Bob Johnson and Kev Kavanagh.

Riley, a photographer (from Manchester originally) tells me noted Queensland entertainer, Rod Houghton had passed away – on September 6, 2014. I had no idea I got to know Rod (and his lovely wife, Doreen), through his dad, Herbie, when my wife and I lived in Widnes, Cheshire in 1977-78. Herb loved taking us to the Navy Club, and, of course, to Naughton Park to see the Chemics play in the English Rugby League.

To Courier-Mail Sports Department Christmas Party at Woolly Mammoth in Fortitude Valley. Nice that they remember me. One beer with Broncos’ media manager, Trad McLean and Barry Dick at Red Lotus Restaurant beforehand.

Learn that Tony Daley is finishing up as principal of Mount St Patrick’s High School, Murwillumbah after four decades. My late sister, Kerri-Anne was a student there, but I went to Murwillumbah High School after primary school at St Pats. Don’t know why mum and dad didn’t send my sister to the same school.

Fly from Brisbane to Port Macquarie, where my good mate, Brian Atherton and his wife, Carole take me to Rydges Hotel for lunch. Drive to Taree via lovely Laurieton and Dunroban. To Group 3 Leagues Club at 4 p.m. where I catch up with former Wingham Tigers’ teammates, Neil Elbourne and Graham Steel, as well as Taree United rivals, Mark Hogan and Errol Ruprecht. Mark played for North Coast against Great Britain in 1974, marking Welsh superstar, John Bevan. Mark also had a stint in Brisbane with Wests. Neil Elbourne was a block busting winger at Wingham, and looks fitter now than in the mid-1970s. He lost a thumb in an abattoir accident, and they replaced it with one of his toes. The Taree City league players are training on the adjoining oval as we enjoy an ale.

When I played for Wingham, I could not get a job in the media, so I worked as a furniture salesman/delivery lad for Manning Valley Furniture. It is now a reject shop. I think I sold a couple of pillows, and that was about it, during my stint there.

Lunch at Forster Golf Club where I catch up with former New South Wales Rugby League finance officer, Chris Turner who is the club’s g-m and local Men of League treasurer. The $8 lunch special is incredible value. In the sports bar talk to two ex-Fairfax (Sydney) printers, real characters.

To Wingham Services Club tonight – the reason for my visit. My uncle, Harry Smith is inducted into the Group 3 Rugby League Hall of Fame for his coaching and playing achievements in the Manning District. Harry was a great character. Balmain offered him a contract, but he went bush, teaching. When I played with Wingham in 1975, I would have the occasional beer with him at the Railway Institute Bowls Club. Harry’s wife, Beryl was a champion golfer, well into her seventies. Tonight, for the first time, I meet Harry’s son, Ian, who lives at Forster-Tuncurry. A barber, he is too shy to get up and speak, so I am interviewed by local radio personality, Marshall Loadsman. Also inducted tonight is Bruce ‘Porky’ Slater, who is present. ‘Porky’ played under my uncle in 1961 . Slater played wing for North Coast against Great Britain at Lismore in 1962 and second row against France at  Wauchope in 1964. He rejected several Sydney offers because he was such a country boy. Former Australian five eighth, Johnny Peard does his excellent comedy routine as part of the night’s entertainment, while his good mate, Leo Toohey belts out a couple of Sinatra songs. Also interviewed is Mitch Barnett, a Wingham boy under contract to Canberra Raiders.

At my table is the great Harry Wells, who played 29 Tests for Australia between 1952 and 1960. Harry lives at Telegraph Point and has a pet emu. He is 83, and fit as a fiddle. He speaks in glowing terms of the great French centre, Jacques Merquey, who played 37 Tests between 1951 and 59.

I catch up with a number of former Wingham teammates, among them Graeme ‘Dawby’ Berriman, Glen Dawson, Rocky Humphries, ‘Jumbo’ Pereira and Dallas Kriss. 1975 was one of my best seasons, winning a couple of 2RE (Radio) best player awards. In those days we played on the showgrounds, and there was usually a gymkhana the previous day, so the ground wasn’t exactly Wembley, and visiting sides dreaded playing there.

At the end of the night a few of us (Peardy the main urger) try to get into the Australian Hotel for a night cap, but the lock-in laws are in force. Wingham’s other hotel, ‘the bottom pub’, burnt down in 2010.

Greg Grainger and ‘Dawby’ Berriman drop in at Brian and Carol’s place. Dawby has been through hell, having suffered a stroke and battled cancer on top of traumatic moments as licensee of the Mt Druitt Hotel in Sydney’s west, including a bashing and an armed robbery.

Lunch with Brian and Carole at Harrington Hotel and back to Taree via Croki, where the entire village is having a Christmas party on the banks of the Manning. The old dairy factor across the river is now a home. Dinner tonight at the Sailing Club, where we bump into Neil Elbourne, who knows Jeff Myers, an old footy rival from my schoolboy days. Jeff’s dad, Johnny, played with and against my father in Lismore.

Irish pilot on flight back to Brisbane says it is ‘Twenty Tree degrees’ in the Queensland capital. Our youngest son, Lliam, and his wife, Channelle pick me up from Brisbane Airport and we drive to Main Beach for a surprise baby shower for our oldest boy, Damien’s wife, Emma. Lliam and Channelle’s little boy, Ethan crawls on the grass for the first time, and finds it fascinating.

My former sports department colleague, Barry Dick has an article in the ‘Sunday Mail’ reflecting on his career and I get a couple of mentions. Barry, like me, played his first senior club football on the Tweed – in my case, Murwillumbah Brothers, in his case, Tweed Heads Seagulls. There was great rivalry between Murwillumbah and Tweed Heads in our day. Kids from the Tweed Heads Junior League would boo when the bus, with the Murwillumbah kids, arrived for games! 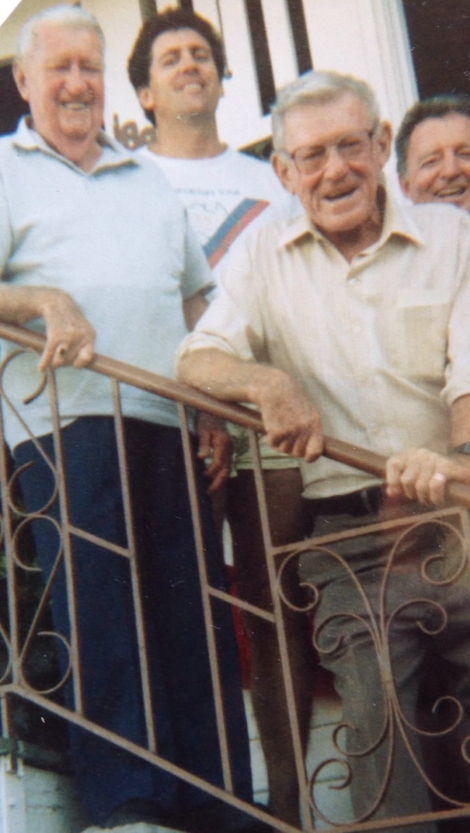 My uncle Harry Smith (second from right) with his step-brother, Jack Hartigan (far left); yours truly and my father, Jon Ricketts