After 18 months self imposed exile from rugby league, Gorden ‘Raging Bull’ Tallis made his return to the playing field – for Australia against the United States in the inaugural Super League World Nines in his home city, Townsville.

Tallis scored a 50 metre try with his first touch of the ball, just 30 seconds into Australia’s 24-0 win.

His first tackle was a bone crunching effort on American, David Bowe.

“He was unlucky. I got him on the wrong foot,” said Tallis. “I was a little bit nervous, but there’s no pressure on you in this type of football.”

Tallis played the entire 1995 season with St George, the Sydney club he joined from Townsville in 1992.

When the ARL won the first Federal Court case, Super League’s plans for its own competition in 1996 were dead and buried. St George insisted Tallis honour the final year of his contract, but he sat out the season.

Tallis moved to Brisbane and trained every day, but wasn’t allowed to wear Broncos’ gear. He and Chris Johns shared club man of the year awards at the Broncos Presentation Ball, Tallis for the example he showed off the field, and Johns for the welfare tasks he undertook.

Australia’s Nines Team was coached by Tim Sheens and captained by Allan Langer. But it was New Zealand who had the last laugh, beating the Aussies in the semi-final and then accounting for Western Samoa in the final.

I covered the tournament for ‘The Courier-Mail’ and ‘Sunday Mail’, as well as an international board meeting, chaired by controversial Englishman, Maurice Lindsay.

I thought the most significant announcement from the board was a new rule designed to protect players leaping for the high ball. The rule already was in force in rugby union, and to me, made perfectly good sense.

I led my story on the rule change, while ‘The Australian’ led their story on a proposed new competition in Japan – as if that was ever going to happen.

As a backdrop to the Nines there was speculation Super League and the ARL were already working on a compromise for 1998, although Super League appeared to be in the stronger position, given New Zealand, Britain, France and Papua New Guinea were all aligned with the ‘rebel’ organisation.

The ARL clubs also were left stunned by the news Kerry Packer’s Channel 9 would telecast Telstra Super League matches, as well as those from the Optus ARL premiership, after Packer had painted himself as the ARL’s strongest ally. 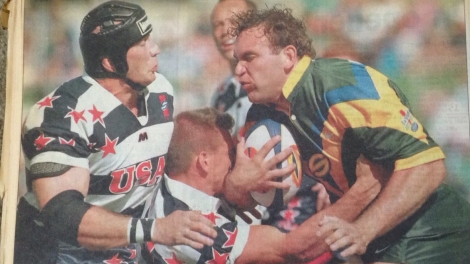