Brisbane Wests rugby league fans breathed a huge sigh of relief when Test centre, Alex Watson announced he would remain with the club after it was feared he would defect to Wests in Sydney.
Watson had asked his Brisbane club for a clearance, given the big spending Wests’ Magpies had offered him 800 pounds a season, plus a “suitable job”.
Under the terms of the tour contract Watson had signed before the Kangaroos left for Britain and France in September, 1956, he was bound to Brisbane Wests for at least one more season on his return.
That was provided the club was prepared to offer equal terms to those he enjoyed before Kangaroo selection.
Wests’ president, Tom Purtell invoked the rule of the time, pointing out that Watson would receive the same money as he had in 1956.
Although that amount was not made public, it is apparent it was less than what Watson would have received in Sydney, where poker machines had just been introduced into the leagues clubs.
Whether he was disappointed or not, Watson put on a happy public face, saying he was glad finality had been reached, and he could settle down and train hard with his Brisbane club, which had been beaten 17-10 by Brothers in the 1956 grand final.
Without Watson, Wests were no match for Toowoomba club, Newtown in a trial at Lang Park with fullback, Len Lewis landing 10 goals from as many shots in the 44-5 win in front of a crowd of 9,000.
Newtown’s line-up included Test stars, Des McGovern and Noel Hazzard as well as experienced former Tweed forward, Vince Soorley.
Wests fielded a team which included unknown youngsters as well as top guns like Ken McCrohon.
At Kitchener Park, Wynnum, the home side beat neighbours, Easts 19-17 with new fullback, Don Fardon; Keith Brown, Bobby Cook and Brian Phillips starring for Wynnum, while Paul Pyers, Reg Jenkins, Ron Rogers and Johnny Bruton stood out for Easts.
Valleys staged grading trials at riverside Hamilton and we’re happy with the form of rugby union recruit, Kev McMahon. Stan Hick, 19, a backline recruit from Blackall in Central Qld., also shone.
Former Bulimba Cup representative, Jim Gallagher celebrated his return to Brothers by scoring three tries in 35 minutes in a trial against Souths at Ballymore, the future home of Queensland Rugby Union, but at the time headquarters of Brothers League
Brothers won 20-5 with fullback, Mick Shannon scoring a try and kicking four goals.
Souths’ new fullback, red haired Bill Lewis from Winton in outback Queensland, looked good.
The Courier-Mail’s Jack Reardon wrote that Souths could build “a strong pack around virile second row pair, Sam Conomo from Innisfail, and former State heavyweight boxing champion, Des Crabbe”.
Brothers’ gun second rower, Jim Duncan transferred to Rockhampton in the off-season. 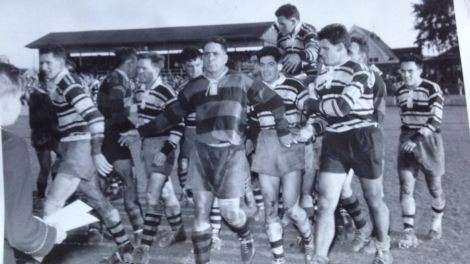