NORTHS’ hooker, Nick Geiger was the obvious, but somewhat controversial choice in the Queensland side to play New South Wales in the first match of the 1977 inter-state series, with Test rake, Johnny Lang out of action with a knee injury.

Geiger had just served a three match ban for a late tackle, and had missed South Queensland’s 24-18 win over the touring New South Wales Country side at Lang Park.

So, while Geiger lacked match practice, it was believed he had the ability to get the Maroons more ball than Prickett or Wain, but Prickett’s form in open play had been superb.

The goal kicking of lock, John Ribot proved the difference in South Queensland’s win over the Don Furner coached Country outfit. It was only the second time in five tours that the Country side had been beaten by South Queensland, an indication of the strength of bush football, south of the border, in those days. (The South Queensland side was dominated by ‘City’ players, after City had belted Queensland Country  41-12 the previous weekend).

South Queensland raced to a 10-0 lead, with the highlight a slashing 50 metre try by Brothers’ centre, Mark Thomas, who ran on to a superb pass from halfback, John Salter. South Qld led 17-5 at halftime, before the Country boys struck back, with both sides finishing with four tries. Centre, Percy Knight scored two for Country.

NSW Country had begun their Queensland tour with a 31-20 win over Wide Bay at Wondai, with indigenous winger, Larry Corowa (a Tweed product) scoring four tries. Prop, Merv Dugdell scored two tries for Wide Bay, who also were well served by Dugdell’s fellow prop, Dave Brown (a future Test forward, who was then only 19); five eighth, Tom Slater; fullback, Dennis Watt (future chairman of the Brisbane Broncos) and centre, Brad Kennedy, a Miami High School product, who would go on to play for Queensland the following year.

The Country boys then beat Central Queensland 22-13 in Rockhampton, with Furner describing referee, Tom Daley as ‘parochial’, after he penalised the NSW side 15-4!

“He (Daley) spent 15 minutes of the match lecturing the front row on how to pack a scrum. What a joke,” said Barnhill.

Corowa scored three tries this time, but the star of the match, and the tour, was centre, Brian Hetherington from Dapto.

The Country side also included Bob Everson, from Cessnock in the Hunter Valley, who had served a 22 month correctional sentence in Cessnock Jail the previous season, but was granted leave to play for the Cessnock Goannas in the Newcastle competition after he showed promise in a ‘friendly’ match in the jail yard.

A former rugby union forward with Blakehurst, in the St George area of Sydney, Everson said he got in with the wrong crowd as a youngster, and wanted to make amends, as he had been given such a great opportunity.

Other members of the side included Phil Amidy from Central Charlestown in Newcastle, and Steve Bartlett from Kyogle.

I played against Amidy in 1975, when I was contracted to Wingham, and he was running around with eventual Group 3 premiers, Wauchope. I had a few beers with Bartlett at Lismore’s Rous Hotel in 2015 – a character, to say the least.

In Brisbane club football, former Test halfback, Dennis Ward made a comeback to football with Wynnum-Manly, where he had been signed as a non-playing coach. Ward put up his hand after Ernie Edwards was a late withdrawal, through injury, from the match against Brothers at Kougari Oval.

A Canterbury-Bankstown junior, Ward played first grade for Canterbury and then Manly, as well as having stints with Widnes (England) and Newcastle Wests.

Ward showed glimpses of his class in an absorbing duel with Brothers’ halfback, John Herlihy, as Brothers ground out a 4-2 win in a tryless match. Brothers’ best were five eighth, Chris Ryan and prop, Peter McNamara, while hooker, John Dowling was the standout for Wynnum.

His former club beat Manly 16-8 in an Amco Cup match in Sydney with fullback, Russell Fairfax kicking four goals for the victors.

.In England, Hull Kingston Rovers were disqualified from playing in the premiership semi-finals after Test forward, Phil Lowe had played in the 18-13 win over Warrington in the quarter finals. Lowe had played for Sydney premiers, Manly the previous year, and had been told to stand down from the English finals because of a contract dispute with the Sea Eagles. 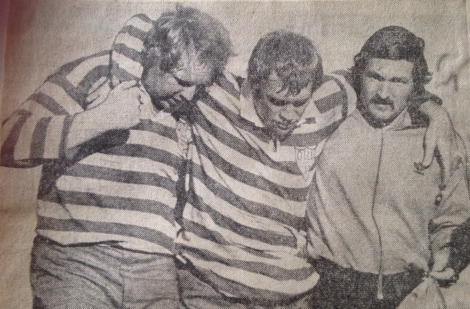 John Lang is helped from the field by teammate, Greg Veivers and trainer, Bill Gardner.