At Brothers’ Leagues Club, former Brothers’ winger, Peter Skerman recalls his Army National Service in the Wiangeree State Forest in the Tweed Valley. He says an accompanying squad of American troops did not cope too well with jungle conditions. Club manager, Anne-Maree reminds me she used to manage Friday’s Nite Club in the city and Queensland State of Origin players were often ‘special guests.’

Opposition Leader, Bill Shorten visits our son, Lliam’s green energy business, Supply Partners at Seventeen Mile Rocks. Our grandson, Ethan is the centre of attention when there is a photo opportunity, especially as he is wearing a Queensland State of Origin jersey. But mainly because he is so cute. Shorten mentions ‘Supply Partners’ three times in media interviews, before a boardroom chat with Lliam and his fellow owners/directors. Hope Bill was impressed by the Australian Rugby League jersey on the wall, one given to me by Australian team manager, Chris Johns following the Trans-Tasman Test in Newcastle in 2004. Chris and I had our share of disagreements during the ‘Super League War. He was in the Super League camp and I was philosophically opposed. But he always acknowledged my love for rugby league, hence the gift of the jersey. Shorten is guilty of a slip of the tongue, calling Queensland ‘The Storm’. What would you expect from a Victorian.

Matt O’Hanlon, principal at Beenleigh High, where our eldest boy, Damien teaches, will go to Aurukun to try to sort out problems at the indigenous community’s school.

Watch State of Origin 1 from Sydney, and Queensland hang on for a 6-4 win in a dour affair, played on a slippery surface. Man of the match is Queensland’s Bribie Island product, Matt Gillett. Queensland forward, Sam Thaiday livens things when he says to Channel 9’s Brad Fittler: “It was a bit like losing your virginity. It wasn’t very nice, but we got the job done.”

To St Lucia for another chat with noted author, Hugh Lunn ahead of his delivery of the annual Ross Livermore Address. Stop at a corner store, where female Asian employee is excited about Queensland’s win. Houses near Hugh’s place sport banners objecting to the University of Queensland’s expansion plans. Hugh talks about his time on Thursday Island, with then Prime Minister, Malcolm Fraser, when debate raged about the definition of the border between Australia and Papua New Guinea.

On my way home. I stop at Kelvin Grove, where there is a Muslim lady, in the full regalia, including a Maroon veil. Go Queensland.

Hugh Lunn’s delivery of The Ross Livermore Address is expertly done, and the attendance of 40 plus is excellent, given the storm which hit the Suncorp Stadium area before proceedings began. I can’t believe anyone turned up. Just up the road, at the Normanby Hotel, a landmark fig tree, comes down in the storm. The crazy conditions were widespread, with a beachside restaurant at Burleigh Heads smashed by the big surf. At lunch at Iceworks, our youngest son, Lliam and his wife, Channelle announce they are expecting a second child. In Townsville, there is an emotional surprise 60th birthday party for our daughter-in-law, Emma’s mother, Angela Parker.

The crazy weather sees the cancellation of a jazz afternoon at historic Newstead House. We go across the bridge to the Breakfast Creek Hotel for lunch in The Spanish Gardens. A big table of ladies near us. They look as if they might have been models in their day. My wife’s t-bone is tough, and when I mention that to the maitre-d, we get $10 off. He hails from Hinckley in Leicestershire, England. I don’t think steaks at ‘The Creek’ are as good as they once were.

There is flooding in North Lismore and the CBD is evacuated.

10 years since death of Graeme Atherton. Hard to believe. Graeme, a product of the Lismore Marist Brothers’ club, was a mate of my Uncle Les Kelly, a World War II POW. In 1972, Graeme, a talented five eighth, represented Queensland from the Brisbane Souths’ club. 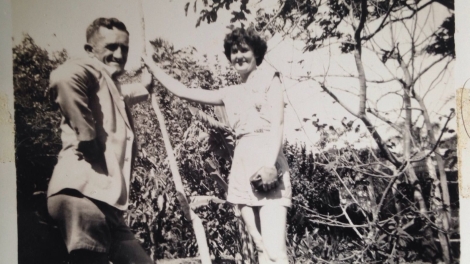