Lewis, a Cannon Hill Stars and then Valeys league junior, had toured the UK and France with the Australian Schoolboys rugby union side in 1977.

In March, 1978 he had been scheduled to play a pre-season game for the Australian Schoolboys against Queensland under-19s at Ballymore, but withdrew after word reached him he was not welcome at the home of Queensland Rugby, given he had been training with Valleys, even though he had retained his amateur status. That was the end of union’s chances of retaining Lewis, not that they were really in the hunt.

Lewis scored the only try for Valleys in their dismal 35-7 loss to the Illawarra side, which was coached by former Great Britain halfback, Tommy Bishop, who had coached in Brisbane two years earlier – at Norths.

Unfortunately, Lawrie Kavanagh’s match report in ‘The Courier-Mail’, referred to Wally as Wayne Lewis. Now that may have been a mistake by the copy taker on the other end of the phone. Remember, this was the age before computers, and, covering night games, required the reporter to dictate to a typist – usually a female – at the other end of the phone. I remember once, saying that a player had “grubber kicked through the defence” and it came out in the paper that he had grubber kicked to the fence. The most famous, by another reporter, referred to a star player by the name of Trevor Ballwork. In fact, the reporter had dictated that a try had been scored through ‘clever ballwork”.

There was concern for Valleys’ hooker, Wayne Barr, who was taken to hospital by ambulance, after suffering a neck injury as a result of a collision with Strudwick in the third quarter.

In the Amco Shield curtain raiser, Iona College from Brisbane’s southern bayside, drew 10-10 with Aspley High from Brisbane’s north, with Iona winning on a count back of penalties.

In other Amco Cup matches, played the same day: Brisbane Souths defeated Gold Coast 10-4 at Owen Park, Southport. Souths led only 5-4 with one minute left, but a try to centre, Bruce Astill, and a conversion by winger, Tom Gillogly gave the Magpies their six point margin. Gold Coast’s four points came from the boot of winger, Ian Dauth, a Beaudesert product, who had switched from Brisbane Brothers to Nerang in the off-season. At Maryborough, Wide Bay defeated Central Queensland 12-3. 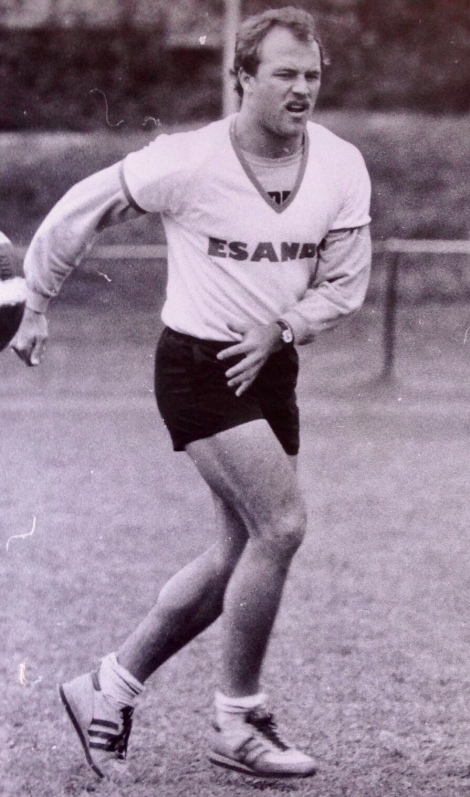