A dozen players and twice as many spectators were involved in a vicious fist brawl 15 minutes before full time in the Easts v Souths rugby league match at Davies Park, in the Brisbane suburb of West End.

Souths’ forward, Nev Brough was knocked cold with a blow to the chin, while teammate, Len Pegg, a State centre, had his left eye gashed.

“Another Souths’ player, F. Jarvis, had a worse face bashing than that meted out to many badly punished stadium boxers,” wrote The Courier-Mail’s L H Kearney.

Souths were leading 15-13, with Easts on the attack, when the donnybrook started, and in no time, players and spectators were embroiled.

Meanwhile, the State selectors picked 56 players for the Queensland trials, after watching the Country trials in Townsville. There were 13 Country players in the 56, including a W Morris from Mt Morgan, an old gold mining town which was a league stronghold. (My uncle, Bill Ricketts, was a police officer at Mt Morgan).

Another notable selection was Noel Hazzard from Bundaberg Natives, who had toured New South Wales with the Queensland side in 1946, playing matches against New England and Monaro. Hazzard would go on to play another 10 matches for Queensland – between 1950 and ’54, seven against New South Wales; one each against Great Britain, France and New Zealand. He also would play 13 Tests for Australia.

In New Zealand, W. A. Swift, a postal official from Auckland, and V M Simpson, a furniture retailer from Wellington, were appointed managers of the Kiwi side to tour Australia. Simpson was responsible for the revival of the 13 man code in Taranaki in 1931.

In England, Wigan beat Bradford Northern 8-3 in the Challenge Cup final at Wembley, in front of a crowd of 93,000. 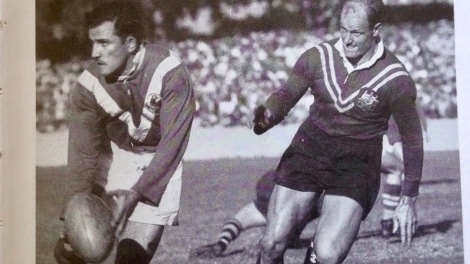