Haircut from Paul ‘The Barber’ at Zillmere. The little cafe next door is licensed now. Paul’s side-kick, Chaz, has quit and cuts hair at home. Nice chat to Paul Bowes and his wife, Carol. Paul, who has been wheelchair bound since a work accident as a young man, has a great attitude, considering the drama he has had to go through recently after suffering burns on his rural property. He was thrilled that former Australian Rugby League skipper, Wally Lewis took time to visit him in hospital. Paul tells horrible tales of other burns victims in his ward, including one lady from Bundaberg, who fell into a fire, twice.

Our daughter, Melanie has to deal with several arrogant clients from the sub-continent, organising an event on Bali.

Attend the funeral of Col Egan, who along with his late wife, Lyn, travelled on three of my Kangaroo Supporters’ tours. Other ‘tourists’ at the funeral include Souths’ Sunnybank league stalwart, Richard Welch and Col’s sister-in-law, Pam Van Dongen and her husband, Fred, a Brisbane basketball legend. There was a good roll-up from Souths Rugby Union and Surfers Paradise Surf Club, two organisations where Col excelled as a young man. He and Lyn really got into league when they lived and worked in Papua New Guinea.

Enjoy a couple of beers with former ‘Courier-Mail’ workmate, Chris Bartlett, as he unloads items from his garage to ‘Gum Tree’ customers. ‘Iqbal’ picks up a chest of drawers – made by Chris’s father — and then pays $10 for a chainsaw.

Buy roses for my wife, Marie, to mark the first day of spring. Today is ‘Wattle Day’ in Australia, but the lady at the flower shop has never heard of it. Bring back Wattle Day, I say, and replace one of the other ‘days’ we mark. Broncos beat Roosters 24-14 at Suncorp Stadium in the final home and away round of the NRL. Our eldest boy, Damien watches from Strudwicks Sports World corporate box. I sit outside the media box with Wayne Heming (who is retiring from Australian Provincial News) and fellow media men, Barry Dick and Trad Mclean. Fans are allowed on to the field after the game, to honor retiring Broncos’ forward, Corey Parker.

Great time at Men of League Queensland lunch, which has Dual Internationals as the theme. Former Rugby League Week editor, Tony Durkin is honored as Volunteer of the Year. Former All Black and Kangaroo, Brad Thorn says Broncos’ halfback, Allan Langer is the best player he has played alongside, in either rugby code, because he won so many games with his brilliance. Other dual internationals interviewed include Michael O’Connor, Geoff Richardson and Mat Rogers. All four played league first.

My cabbie for the home journey, is from New Dehli. He says there are too many Indians, crammed into housing at Sunnybank.

Dinner at Breakfast Creek Hotel with youngest son, Lliam. Former Brothers’ player, Mick Hayden is having his bucks party. Former Brisbane Norths and Valleys’ star, Ziggy Strasser is enjoying a beer in the public bar. My Indian cabbie says there are too many Indian cabbies!

A statue of former Great Britain rugby league winger, Billy Boston is unveiled at Wigan, in Greater Manchester. A Welshman, Boston played 31 Tests. He was my late father, Jon’s favorite winger. Dad was a winger himself, for the South Lismore club.

In Bundaberg there is a reunion for the 1966 Wide Bay rep., side which played Great Britain. The Poms, captained on that tour by Harry Poole, won 30-22 before a crowd of 5,515 at Bundaberg’s Salter Oval.

Father’s Day Breakfast at Main Beach (Southport) Pavilion cafe with our sons, Damien and Lliam, their wives and children. On the beach there is a bloke wearing Brisbane Brothers’ rugby league shorts and a Reds rugby union top.

In New Zealand, Allen McLaughlin calls his last game for Radio Sport NZ – the Warriors v Eels at Mt Smart Stadium. I met Allen many times – in NZ, Britain and Australia – while covering league. He is a gentleman and a great ambassador for the code in a land where union dominates. 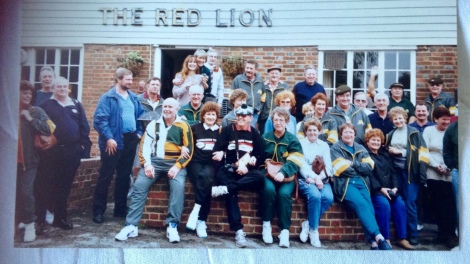 Photo: Col Egan and his wife, Lyn (front row, in matching dark outfits) outside the Red Lion at Charing Heath, Kent on my 1994 Kangaroo Supporters’ tour.