FLASHBACK
NOVEMBER 1963
Less than 18 months after winning the Ashes series in Australia, Great Britain fell to its greatest humiliation at the hands of the Kangaroos when the Arthur Summons coached side belted the Lions 50-12 at Station Road, Swinton in Lancashire.
For many years, Swinton had been regarded as hoodoo ground for the Australians, but on this day the crowd was stunned into silence as hooker, Ian Walsh led the Australians to a most emphatic win, with lock, Johnny Raper in majestic form.
Among the spate of records were the following:
Prior to that amazing Second Test win, Australia had won 11 of its 12 club matches, losing only to Featherstone Rovers. But the Kangaroos had gone down to County sides, Yorkshire and Lancashire. They beat the other major league county, Cumberland, 21-0 at Workington.
So what happened to Great Britain in the time since they had convincingly won the series against Australia in Australia mid-way through 1962, as well as thrashing Sydney premiers, St George 33-5?
That team is still regarded as one of the finest to tour down under, with 23-year-old halfback, Alex Murphy rated the best player in the world.
But it was the last hurrah for many of those players, who were entering their twilight years, and British selectors failed to look to the future.
In fact, alarm bells should have sounded after the Lions lost both Tests in New Zealand after the Australian leg of their tour. And in the lead-up to the Kangaroo tour of 1963, Britain lost 17-12 to France in Perpignan, although, it has to be said, that British pride was well and truly restored in the return clash at Wigan, when the French went down 42-4.
In 1963, Britain had lost the First Test against the ‘Roos, 28-2 at London’s Wembley Stadium.
What has to be remembered about the Swinton debacle is the fact Britain played with only 11 men for the entire second half, after losing skipper, Eric Ashton (a centre) and five eighth, Frank Myler to injury. No replacements were allowed after halftime. But Australia led 31-8 at the break.
Australian hooker, Noel Kelly said the Kangaroos were at the height of their powers, and smashed the British forwards.
“It was one of those magical afternoons on a football field,” Kelly wrote in his biography, ‘Hard Man’. “It was Johnny Raper’s great day. ‘Chook’ has never played better. Now and then I dig out the black and white film of the match. The sight of Ken Irvine scampering down the wing (Irvine scored three tries) and Langlands and Reg Gasnier really flying, still sends goose bumps down my spine.”
Kelly scored a try as well, with radio commentator, Frank Hyde saying he displayed all the grace “of a cow on a bike” in scoring the try.
“I take the deepest offence at this outrageous remark,” Kelly said, tongue firmly-in-cheek. “I prefer to think of it more as ‘Gasnier like’ in its style and execution.”
Dual rugby international halfback, Arthur Summons was captain-coach of the Kangaroos, but was ruled out of the Tests with injury. His place went to Queenslander, Barry Muir.
After their humiliation at Swinton, the Poms bounced back for a win in the ‘dead rubber’ Third Test in Leeds, but it wasn’t until 1970 – in Australia – that the Lions were able to regain the Ashes.
They lost the Test series 2-1 in Australia in 1966 and 2-1 again at home, in 1967. They also failed to make the World cup final in 1968.
A week before the Test, the Kangaroos had beaten Barrow 18-5, in front of a crowd of 10,130.
The Barrow side included Jim Challinor in the centres, and he would go on to coach the 1974 Great Britain side in Australia. 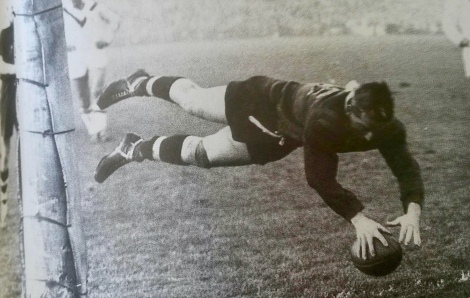