DIARY OF A RETIRED RUGBY LEAGUE WRITER
WEEK 9, 2017
MONDAY, FEBRUARY 27
Walk to Taupo town centre. Butcher lived at Wynnum for six months. Says our sirloin steak will be the best we have eaten. Walk south along Lake Taupo. Hot water flows from the hills. I have a swim in the lake before another swim in our motel pool, where we chat to Bill and Sue from Wellington, who are on their way home from Auckland, where they went to Bruce Springstein Concert at Mt Smart Stadium. They work with disabled people, and have a son-in-law (from Finland) who left his home land, for New Zealand, “because there were too many immigrants”.  Sirloin gets thumbs up, but still not my favorite cut of beef.
TUESDAY, FEBRUARY 28
Walk Waikato River, past sewerage ponds, to bungee jump point. Angie, a Scots lass, asks us the way to Huka Falls (as if we’d know), and follows us. We get there, and enjoy a picnic lunch, while talking to a Newtown Jets’ rugby league supporter from Sydney. Walk back through Redwood Forest and are joined by a Dutch girl, Meryl, who wants us to show her the way. It must be because we are old and wise looking. She is staying with a former schoolmate, who is a sommelier at posh Huka Lodge.
WEDNESDAY, MARCH 1
Cruise on Lake Taupo on ‘Ernest Kemp’ (1980) followed by drive to lovely Kinloch. Yacht ‘Fearless’, with its red sails, reminds me of my late father, Jon’s favorite song, ‘Red Sails in the Sunset’, which was played for him on his death bed.
THURSDAY, MARCH 2
Drive around the lake. Back at our motel pool we chat to couple from Colchester in England (originally from Kendall). On their NZ travels they met American baseball identity, Jim Kaat, a former top pitcher, now television commentator. Tonight I watch NZ sports show ‘The Crowd Goes Wild’. It is so bad, it is good, if that makes sense.
Back in Australia there is the funeral of former Brisbane Norths and Valleys’ rugby league player, Leo Donovan OAM. When he was 19 (in 1941) Norths’ players were given two bottles of beer at the end of each training run, to stop them from going to the pub. But Leo didn’t drink, so that made him very popular with teammates. His Order of Australia Medal was a tribute to the work he did for the public hospital system.
FRIDAY, MARCH 3
Take a float plane flight over the lake, with a young pilot, Dane, who has worked on the Gold Coast. He is Barefooted as takes us aloft. No Rugby League Week at the local newsagency, even though female proprietor is a league fan. Taupo is gearing up for Nutri Grain Ironman event, and Aussie bloke at our motel says he will win. Salmon from Bluff on the South Island for dinner. Bought at supermarket. Tried seafood place, but produce looked basic and Indian proprietor was rude.
SATURDAY, MARCH 4
Walk the esplanade to see competitors in the Iron Man (should that be Iron Person). Conditions awful -cold, windy. The professionals are amazing athletes – from New Zealand, Australia, Estonia, Belgium, France, Germany, USA, Switzerland, Korea, Netherlands, UK, Switzerland and Canada. Former Canberra Raider, Sam Williams is man of the match in Wakefield’s win over St Helens in English Super League, and donates the 250 pounds cheque to Terry Campese Foundation.
SUNDAY, MARCH 5
Leave Taupo for Wanganui. High tea at Tongariro Chateau on the way. Marie had been there in 1970 with her best friends, Janelle Vidler (now Bryant) and Michelle Gordon. Michelle, now deceased, married a Kiwi, Geoff Smith. Two ladies near us shed a tear as pianist plays ‘Sounds of Silence’. Maori lady speeds past us in 50 km zone near Lismore Forest. Wanganui River the same color as the Brisbane River – muddy. Our motel near the Dublin Street Bridge is basic. Bloke in room next to us, a smoker, is working on power stations. A league man, he has no faith in the Warriors. 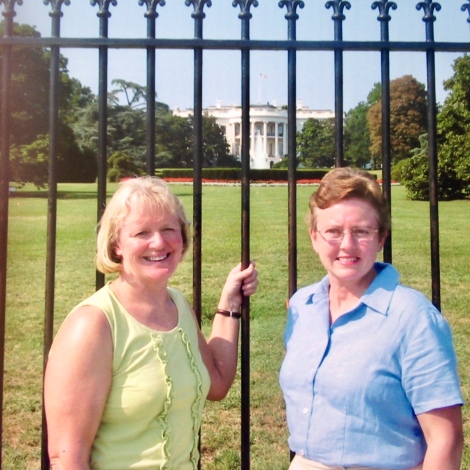