TOULOUSE Regional Sports Centre. What could possibly go wrong?
Accommodation for the first week of Queensland Residents Tour of France in 1989 was this multi sports complex on the outskirts of Toulouse, France’s fourth largest city.
The team, captained by Bill Holmes (Valleys, Brisbane) and coached by Blackwater’s Greg Reynolds, was accommodated at the Metropolitan Hotel, Spring Hill, Brisbane when it went into camp in mid-September.
Good start. The Metropolitan was run by the Farquhar family, whose connections with both rugby codes is legendary.
JAL (Japanese Airlines) were our carrier (after Air France bailed out following industrial action), and there certainly was no cause for complaint about their service, as we traveled to Paris, via Tokyo and Anchorage (Alaska)
International Federation official, Tas Baiteri met the side at Paris Airport, and a convivial round of drinks ensued during a five hour stop over, before a domestic flight to Toulouse.
Toulouse Olympique rugby League Club hosted the Maroons at their ground, and everything was going swimmingly.
Then we arrived at the sport centre. When I say ‘we’, I was part of the side, in effect, with the Queensland Rugby League subsidising my trip. (They paid for the airfares and accommodation – The Courier-Mail provided my expenses – meals, drinks, cab fares etc).
It was not an ideal arrangement for a journalist, because it could be said (quite rightly) that it compromised my independence.
Anyway, I like to think I was forthright and honest in my reporting.
That first night I shared a room with Redcliffe halfback, Ray ‘Gas’ Ovens, who didn’t mind a fag.
Queensland Rugby League managing director, Ross Livermore and legendary State of Origin Manager, Dick “Tosser” Turner were following the tour, Turner out of his own pocket.
When he saw that we were staying in a place equivalent to a sub-standard backpackers, he produced the American Express Gold Card, and had us shifted to a Formula 1 hotel. Now, it was like living in a submarine, but, strangely enough, the Formula 1 was superior to the sports centre, where each room had a tiled floor, two single beds, two chairs and six small shelves. That’s it.
Valleys winger, Shane Buckley needed four stitches in a knee wound after he slipped on the floor. There was nowhere to hang clothes and toilet and shower facilities had to be shared with the adjoining room.
Livermore said he could not believe the QRL had spent $70,000 getting the side to France, only to find accommodation unsuitable for schoolboys, with corn flakes and yoghurt the only food available for breakfast.
“These are supposed to be the best 20 players in Queensland domestic football (State of Origin players and those from the Brisbane Broncos and Gold Coast Giants, were not considered), and they should be treated as such,” Livermore said. “We cant expect the players to give their best if they are not happy with their accommodation.”
French league officials agreed the accommodation was sub-standard and tried to have the Queenslanders moved to another wing of the complex, but the centre was booked out by soccer, rugby union, gymnastics and judo squads.
So it was Formula 1, where at least the players had television, and carpeted floors.
And next door was a Buffalo Grill, which the players loved.
The first match was to be against Aquitaine Province at Villeneuve-sur-Lot, the first town in France to adopt the rugby league code, way back in 1934.
I will post more stories on the tour in 2019, the 30th anniversary of the only tour of France by a Queensland side. 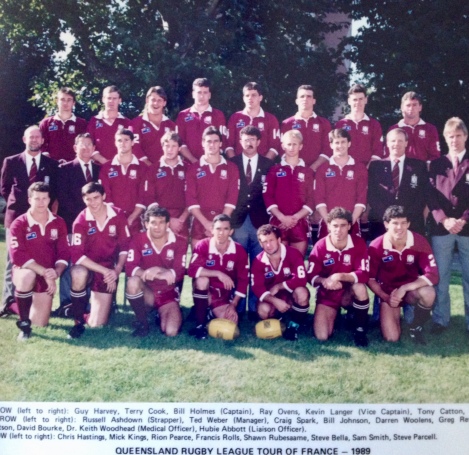 Photo: The Queensland team in Toulouse.

One response to “LEGENDARY MANAGER TO THE RESCUE”