DECEMBER 1988
Wigan Superstar, Ellery Hanley signed a lucrative contract to play the English off-season with Sydney’s Western Suburbs Magpies in Australia.
Hanley had had a guest stint with Balmain in the previous off-season, playing a huge role in the Tigers’ unexpected march to the grand final, where they were beaten 24-12 by Canterbury Bankstown.
Hanley was replaced at halftime by Scott Gale, and had no memory of the match following a late hit from Canterbury five eighth, Terry Lamb.
In the 1989 NSWRL season, Hanley played 13 matches for the John Bailey coached Magpies, and scored four tries. He was coming off an English season in which he had played 38 matches for Wigan and scored 25 tries, as well as potting a field goal.
In that 1988-89 season, Wigan boasted players of the calibre of New Zealanders, Dean Bell and Adrian Shelford; brothers, Kevin and Tony Iro from the Cook Islands, as well as noted British players like Hanley, Shaun Edwards, Dennis Betts, Phil Clarke, Andy Goodway, Bobby Goulding, Henderson Gill, Steve Hampson, Andy Platt and Shaun Wane.
This was truly a champion team, probably the best in either rugby code in Britain at the time, and arguably the best in the world after they had beaten Sydney premiers, Manly-Warringah the previous year. The coach was Kiwi, Graham Lowe and the chairman of the club, the controversial, Maurice Linsday.
In the keenly awaited Boxing Day clash of 1988, Wigan defeated neighbors, St Helens 18-11 at Knowsley Road, in front of a crowd of 21,509.
Joe Lydon scored a try and kicked three goals for Wigan. Earlier in the month, Lydon had been given a nine month jail sentence, suspended for two years, for assaulting a nine-year-old male spectator, on the field, after the Good Friday match against St Helens at Knowsley Road.
In other news from the UK in December, 1988: 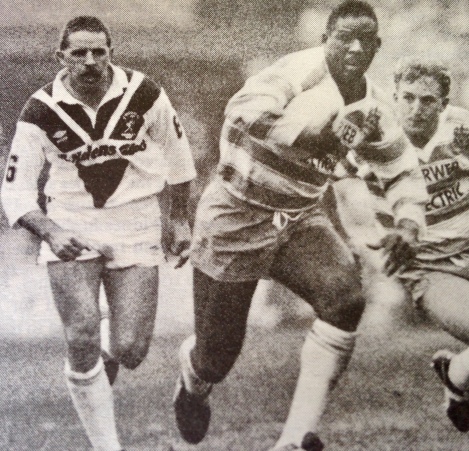 Jon and Lola Ricketts on their wedding day, May 12, 1951, outside St Carthages Cathedral, Lismore.
%d bloggers like this: