DIARY OF A RETIRED RUGBY LEAGUE WRITER
WEEK 20 2017
MONDAY, MAY 15
Learn of the passing of a former Brisbane Brothers’ teammate, Mick McGarrity, a rough and ready forward, who always gave 100 percent. He was a publican at Boonah in Queensland’s Fassifern Valley when he passed away. He also had had a heavy involvement with rugby league in the Northern Territory.
Coffee with former Murwillumbah Brothers’ teammate, Mick Hession. Mick is going to Darwin later in the week.

Photo 1: Mick McGarrity.
TUESDAY, MAY 16
Lunch at brother-in-law, John Donnelly and his wife, Jan’s house at Tweed Heads, after a surf at Rainbow Bay. On a river walk, I come across a plaque dedicated to my former Murwillumbah High librarian, Bruce Chick, who was the Tweed Valley’s Man of the Trees, a noted environmentalist. ‘Mr Chick’ died in 2007, aged 97. One his sons, Phillip was in my class at school. Another son, Malcolm, died while serving his country with the RAAF in 1968. In 1970 my fellow school captain, Gail Howard and I planted the first tree of a mini forest at Murwillumbah High, as part of the Captain Cook Bi-Centenary Celebrations. The forest concept was Bruce Chick’s idea.
Trawlers leave Boyd’s Bay for the open sea. Roast pork at Tweed Heads Bowls tonight, and then dance to the music of a male entertainer from Port Pirie in South Australia. 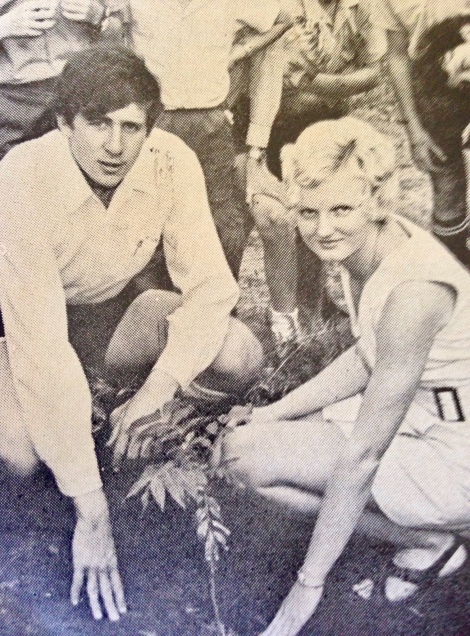 Photo 2: School captains, Stephen Ricketts (left) and Gail Howard plant the first of 750 trees at Murwillumbah High in 1970.
WEDNESDAY, MAY 17
Another surf at Rainbow Bay, and then lunch with my brother, Jeffery at his South Tweed Heads’ home. Drinks at Greenmount Surf club, and there is a reunion for Maroubra Seals Sports and Community Club. I have a long chat with former Tweed Heads Seagulls, Cronulla, Illawarra, Newtown, North Sydney, Toowooomba All Whites forward, Peter Ryan (He played at Ayr in North Qld as well, and had a stint at Wagga Wagga. He played until he was 38, and took up rugby union, which he played until he was 47).  ‘Pedro’ is going well,  after deep brain stimulation surgery for Parkinson’s. He recalls him and Brisbane representative forward, Forrester Grayson being dropped to reserve grade at Tweed Seagulls after a big night on the drink. I remember it well, because they played against my club, Murwillumbah Brothers at the Murwillumbah Showgrounds, and our reserve graders were terrified.

Photo 3: Peter Ryan.
THURSDAY, MAY 18
Former Test winger, Michael Hancock and Broncos’ Game Development Manager, Paul Dyer take footy training at Beenleigh High, where our son teaches. Cronulla beat Cowboys 18-14 at Shark Park, after the Cowboys led 14-0 at halftime.
FRIDAY, MAY 19
Broncos’ hooker, Andrew McCullough is knocked cold, attempting a tackle on Wests Tigers’ inter-change player, Kyle Lovett. For a little while, I thought McCullough was dead, it looked that bad. Brisbane thrash the Sydney mob 36-0, with five eighth, Anthony Milford producing a blinder. Channel 9 commentator, Paul ‘Fatty’ Vautin, tells me how much he enjoyed the Padua reunion. (He is a former student). A FoxSports cameraman asks me about the ‘old Kangaroo tours, the ones I covered in 1980s and 90s. He is envious, given that those days are gone forever.
SATURDAY, MAY 20
Strange people on Kedron Brook path – dressed like they are in Iceland, yet it is a lovely day. Take our eldest boy, Damien to Doomben races. I walk to Gibson Park, Stafford, via Hickey Park, where the home side, Wilston Grange, are playing Surfers Paradise in Aussie rules. At Gibson Park, Brothers host Dayboro in the rugby league. One of the Dayboro props sails close to the wind, re his style of play. I have a long chat to Brothers’ Juniors president, Terry O’Regan, a former South Queensland Crushers and Brothers’ centre, a graduate of Kedron’s Padua College. Terry works for his father-in-law, former Australian captain, Greg Veivers’ insurance business.
Learn of the passing of my wife, Marie’s uncle Barry Geraghty, in Casino.
SUNDAY, MAY 21
Former Toowoomba Clydesdale, Frank Barrett commentates on Foxsports rugby league from Newcastle. Former Test hooker, Danny Buderus congratulates Frank on his appointment as new Men of League chief executive.
In Perth, Melbourne Storm beat South Sydney 14-6, and Englishman, Sam Burgess proves his side’s best, despite a nasty injury. Burgess said he felt three cracks in his back/neck area as he was twisted awkwardly in a tackle.
NITV show a rugby league match between the Northern Territory and South Australia. The commentator is English.