JANUARY 1979
The Courier-Mail’s Barry Dick trumpeted Mal Meninga as a player to watch in the 1979 Brisbane Rugby League season, after the giant centre starred for the Queensland under-18s the previous year.
Meninga and fellow police cadet, Peter McIllwain from Murwillumbah Old Boys, were signed by Souths’ coach, Wayne Bennett, who was physical education instructor at the police academy.
Dick, now retired from The Courier-Mail, wrote that Meninga was a ‘handy signing’.
“Meninga, a solidly built type with a surprising turn of speed, was chased by Sydney club, St George after some great performances in the (under-18) inter-state series last year,” Dick wrote. 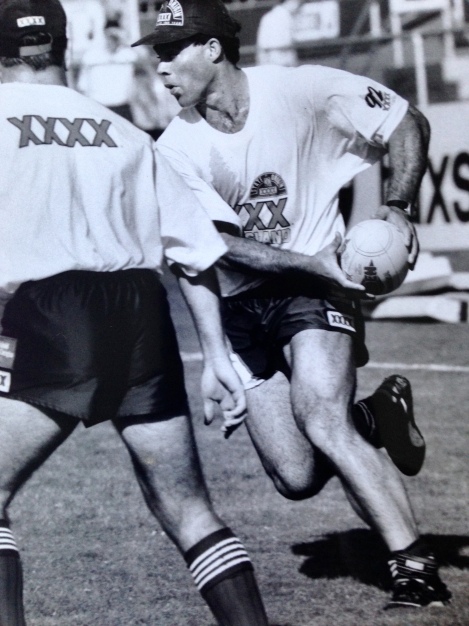 Photo 1: Mal Meninga
Other players signed by Souths included Easts’ rugby union skipper, Sean Mowen; Wests’ winger, Carlo Costa; Doug Gibson (Toowoomba), John Cairns (Beenleigh), Chris Kealey (Wondai) and Goodna duo, Wayne Bretherton and Ricky Price.
The club was still reeling from the drowning death of lock forward, Pat Phelan, in the Brisbane River the previous year.
Souths’ secretary, Sel Deed said the players would be “playing their heart out for Pat” in 1979.
The club had organised a benefit night for Phelan’s widow and their five-year-old son.
Souths’ Test centre, John Grant (a future chairman of the Rugby League Commission) announced his retirement at the end of the ’78 season.
Wests coach, Don Oxenham was relying largely on graduates from the club’s junior ranks, but was pleased to see winger, Mick Reardon and prop, John Young return.
Brothers, second last in 1978, were tipped to climb the ladder in 1979, following the return of State forward, Bob Cock from Nerang and the signing of the likes of David Sinclair (South Sydney); State squad forward, John Tobin (Gympie); Ipswich pair, Greg Quinn and Rex Jorgensen; and Toowoomba’s Graham McCullough (father of Broncos’ hooker, Andrew). McCullough was recommended to the club by former Test five eighth, Johnny Gleeson.
Former Test winger, Wayne Stewart also signed with Brothers, as he attempted a comeback, after a long career with Wests’ Panthers. Also on the comeback trail was fiery indigenous forward, Noel ‘Chips’ Harrington.
Norths, the 1978 wooden spooners, were widely tipped to finish last under new coach, Graham Lowe, from the Otahuhu club in New Zealand.
Two new signings were Kingaroy product, Dennis Moore; and yours truly.
Dennis and I were signed, in a package deal, by Norths’ president, Bob Bax, with our signatures going on the back of beer coasters in the time honored tradition of ‘Baxxy’ negotiations. They were standard contracts – $200 a win, $30 a loss.
I played the entire Woolies pre-season in first grade, but after that, the only time I featured in first grade was against Redcliffe, the day they officially opened Dolphin Oval. I played a full reserve grade match and then 50 minutes in first grade.
The next week, reserve grade coach, Bill Millican dropped me to reserve for reserve grade. Go figure.
And Norths did not finish last. Brothers, who told Dennis Moore and I we should look elsewhere, because they had so many quality players, finished second last for the second year running, while Norths were two places above them in fifth spot. Wynnum-Manly claimed the wooden spoon. Brothers, coached by former State forward, Reg Cannon, only avoided that fate because of a superior for-and-against.