DIARY OF A RETIRED RUGBY LEAGUE WRITER
WEEK 21, 2017
MONDAY, MAY 22
Billy Slater misses out on a place in the Queensland State of Origin side, something I had been tipped off about some time ago, and which I suggested as a story to one or two scribes. Tonight there is a great interview on Matt Johns’ Show (FoxSports), with former South Sydney teammates, Mario Fenech and Les Davidson. They would eat alive some of the modern day forwards.
This morning I took our grandson, Ethan to the local park at Paddington, where he was fascinated by the ‘water board’ men checking the sewerage. Ethan also was impressed by the skateboarders, one a Frenchman from Normandy.
TUESDAY, MAY 23
Surf at Main Beach on the Gold Coast. Take our granddaughter, Parker to the playground beside the surf club. A Chinese lady photographs her on the swing.
There is a bomb atrocity in Manchester, at a music event, and 22 people die.
Death of Sir Roger Moore. He was born the same year (1929) as my father, Jon, who had his autobiography, a gift from me. I first saw Sir Roger in ‘The Saint’ television series, and later, when I wrote the Cabarita Surf Club notes for the Tweed Daily News, it was under the pseudonym, ‘The Saint’, with the same stick figure.
The History Channel has a special on Australian boxing legend, Les Darcy.
WEDNESDAY, MAY 24
State Parliament honors the Queensland State of Origin side with a reception, to which I am invited, as secretary of the QRL History committee. Our youngest son, Lliam is also in the Parliamentary precinct, conducting a press conference about solar power. I didn’t realise it was him in the media scrum, with Energy Minister, Mark Bailey. Lliam only got the call at 10 a.m.and didn’t have time to tell family. The Queensland team’s long serving and respected coach driver, Mick ‘Mullet’ Willetts, says the Maroons will stop at Yatala Pies on the way to their camp at Sanctuary Cove. It is a tradition, and, in this case, a necessity, because the food portions at Parliament House are not big enough for footballers. Jason Costigan, MP for Whitsundays, is not happy that Bowen has missed out on a match in the Queensland Cup this year. Shane Knuth is also one of the MPs on hand. I interviewed him several times when he played first grade for Redcliffe in the 1980s. Most of the smokers in the CBD are, it appears, are Asian, or of Asian descent.
THURSDAY, MAY 25
Chat to former Valleys’ player, Terry McCabe outside Newmarket shopping centre, after I have a haircut. Fly to Hong Kong tonight on the first leg of an overseas adventure. Watch the movie, ‘I Daniel Blake’.
Ben Barba signs with St Helens rugby league in England, after a brief stint in rugby union with French club, Toulon.
Former Wynnum-Manly and North Queensland centre, Neil Moy has had a second knee replacement.
FRIDAY, MAY 26
Breeze through Customs at Hong Kong. Our daughter, Melanie is there to greet us and we catch the train to her apartment, at West Sai Ying Pun, an area full of shops selling dried fish, although there never seems to be anyone in there buying! I spot a few shark fins!! It is our first time in Hong Kong. The harbor view from Mel’s apartment is amazing. First stop, Man Mo Temple, then a tram to The Peak. Nice bush walk, followed by a cab ride down the mountain. Big lunch at a food hall, where the waiters are friendly, and funny. After our daughter meets with representatives of Google (as part of her job as an events manager), we dine at Publico restaurant, followed by drinks at ‘The Globe’, where a Swans v Hawks Aussie rules game is showing. Next stop, Quinary Bar, one of the top 50 in the world. 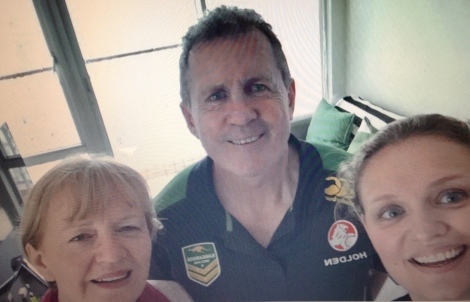 Photo 1:With our daughter, Melanie.
SATURDAY, MAY 27
Massive day. Our daughter forgets how old we are. Beautiful seafood lunch on Lamma island, with Mel’s friend, Beth, then a ferry ride back to Aberdeen, then a bus trip to Mel’s apartment, where we watch the last 20 minutes of the Broncos v Warriors match from Auckland, with the Warriors winning 28-10, with halfback, Shaun Johnson on fire. Drinks at a rooftop bar with Josh and Sophie Rafter. Next stop, a French restaurant in a food hall, followed by drinks at another rooftop bar -Wooloomooloo.
Back in Brisbane, there is a roll-up of 112 at the Queensland Rugby League History Committee’s annual Ross Livermore Memorial Lecture, which I helped organise. It was delivered by fellow committee member, Steve Haddan and centres around the history of the Brisbane Rugby League competition, which is so brilliantly detailed in his book ‘Our Game’, which I played a small role in producing.
SUNDAY, MAY 28
Dumplings at a Michelin Star restaurant. ‘Solar Star’ (ferry) to Kowloon, and there is drama as the ferry clips the wharf, damaging the vessel and the structure. Very embarrassing.  Drinks at Aqua Bar, where there is an amazing view. It is ‘Helpers’ Day’ in Hong Kong, a statutory rest day for live-in migrant workers, who use the day to stock up on food for the week, and to socialise. Back at Mel’s apartment we watch the end of Raiders v Roosters match, with an under strength Roosters succumbing 24-16 to the lads from the national capital. Queenslander, Lindsay Collins, the grandson of former Test winger, Lionel Williamson (ex Newtown), makes his debut for the Chooks. Lunch at Maxims (Peking Duck) then the train to the airport, where we enjoy the hospitality of ‘The Pier’ Lounge. There are some loud people. An old Chinese couple, with their mobiles on speaker, are, in the words of the late Peter Frilingos ‘world class gibberers’.