DIARY OF A RETIRED RUGBY LEAGUE WRITER
WEEK 43 2017
MONDAY, OCTOBER 23
Former Australian forward, Bruce ‘Goldy’ Walker starts as manager of New South Wales Men of League. He is a Brisbane Easts’ product, and was coached, at under-17 level, by Brian Smart, who went on to become the club’s chief executive. I didn’t even know Bruce was a Queenslander, until he was called into the Origin side in 1982, four years after he had represented his country.
Our place shakes from the club demolition work next door. The old Brothers Leagues has been flattened. Dog poo on our front grass. Estate manager, Harry Moore says residents take their little canine darlings out for ‘an empty’ at night.
TUESDAY, OCTOBER 24
Former Queensland State of Origin prop, Gavin ‘Jed’ Allen tells me what an inspirational coach, Paul ‘Fatty Vautin was, in 1995, when the underdog Maroons beat New South Wales. Gavin agrees with me, if Queensland had not won the first game – which they did, 2-0 – the Blues would have won the series, and may have done so convincingly. I know I am a grumpy old man, but I hate young bar staff calling me ‘buddy’, which one bloke in particular does, quite loudly, at the Stafford Tavern.
WEDNESDAY, OCTOBER 25
One of our eldest son, Damien’s neighbours, Tim, used to work art Bird Watcher’s Bar, Surfers Paradise. He remembers the El Rancho Steak House, a favorite of mine in the early 1970s.
THURSDAY, OCTOBER 26
Bloke at pub tells tales of thieving painters and dockers on the Brisbane wharves, back in the 1970s. They even took toilet rolls and soap from the toilets. Also has yarns about atrocities at the old Balmoral pub – sex on the bar and the lights being shot out. It was a painters and dockers hangout, but now is gentrified. I remember my English mate, Paddy Hart going in there, and walking straight out, and Paddy is as tough as they come.
Brisbane based American engineer, Rob Schwartz, has watched rugby league movie, ‘This Sporting Life’ at my urging, after he talked about all the great sporting movies from the USA.
FRIDAY, OCTOBER 27
Interview former Wallaby five eighth, Paul McLean for Men of League magazine, at the request of Queensland chairman, Darryl Van de Velde. Meet Paul at a Grange coffee shop, where Radio TAB announcer, John McCoy and his wife, Carmel, who are good friends with the McLeans, are having morning tea. Paul recalls former Courier-Mail league writer, Jack Reardon writing match reports at the McLean family pub at Ipswich. Paul played rugby league until he was 17, only taking up union when he completed his schooling at Brisbane’s Nudgee College. Paul played his early league for Brothers in Ipswich and St Edmunds College, and from age 13 to 17 played regularly against future league international, Graham Quinn, who attended Iona College.
Death of Channel 9 NRL boss, Matt Callender. I met him during my one and only appearance on Channel 9’s ‘Footy Show,’ and he made me feel welcome, even though I was a Neville Nobody.
Rugby League World Cup opening ceremony before Australia v England match in Melbourne. Former French coaching director, Louis Bonnery is flag bearer for France and former Test centre, Garry Schofield for England. Channel 7 have the television rights, which doesn’t seem right, given they have always been full-on Aussie rules. Mark Braybrook, Renee Gartner, Laurie Daley, Jim Wilson and Benji Marshall are part of the commentary team. Australia beat England 18-4 and fullback, Billy Slater is man of the match.
SATURDAY, OCTOBER 28
Our eldest boy, Damien turns 37, and attends reunion for his Norths Brighton under-17 side, which defeated Capalaba in a memorable grand final, at Banyo in 1997. Damien pulled off the hit of the match, right in front of a group of his mates, who went right off. The coach was Lloyd Alley and the skipper, Damien’s close mate, Sean O’Keefe.
Beenleigh High teacher, Connor Broadhurst signs with Penrith Panthers.
In the World Cup, Wales fall to an embarrassing 50-6 loss to Papua New Guinea in Port Moresby. What hope has league got in Wales, when there are scorelines like that? New Zealand belt Samoa 38-8 in Auckland, a pleasing result given the Kiwis were written off by many, following the decision of key players to represent their Pacific Island nations. Kevin Naiqama is man of the match in Fiji’s 58-12 win over a USA team, which includes a number of players from ‘domestic’ American clubs, such as the New York Knights, Central Florida Warriors and the Philadelphia Fight.
SUNDAY, OCTOBER 29
Damien babysits, while his wife, Emma does surf patrol at Main Beach. Macca, on ABC radio, reminisces about never-say-die, St George halfback/centre, Billy Smith. Billy was one of my favorites, too. Mongrel dog next door (Toby) never stops barking, so, once again, I put the transistor radio up against the fence, with radio 4KQ up loud. The ultimate counter weapon.
In the World Cup, Ireland beat Italy 36-12 in Cairns. There are only two players from Irish domestic clubs – Alan McMahon (Waterford) and Casey Dunne (Athboy). Scotland, who lost 50-4 to Tonga, did not have any players from domestic clubs. The saddest result of the day, was France’s 29-18 loss to Lebanon in Canberra. Centre, Bastien Ader from Toulouse scored two tries for the French on debut, but the result shows just how much the game has fallen, in a country which regularly beat Australian, New Zealand and British sides in the 1950s and 60s. It was Lebanon’s first World Cup victory. I covered their match against the Kiwis in Gloucester, England in 2000. 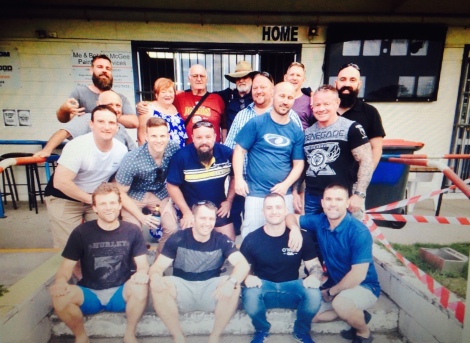