But Maria Island! Where the hell is that?
That’s what I thought, when my wife, Marie suggested we embark on a three day walk on Maria (pronounced Ma R I A) Island.
The island, all 115sq km of it, is located off Tasmania’s east coast.
Marie and I arrived in Hobart on January 12, and booked into our accommodation before exploring the city. It was my first time in ‘Tassie’, and Marie’s second. She had been there, on a coach trip, as a 16-year-old, fresh out of Richmond River High in Lismore.
A cruise ship was in, and one of the passengers was wearing an old North Sydney Rugby League jumper. A beacon in heathen AFL heartland.
While we were having drinks at the Long Bar, at the Henry Jones Hotel, one of our fellow patrons was future Prime Minister, Malcolm Turnbull. One of Malcolm’s aides bought him a beer, and then spilled it all over him as he went to place it on the table. Malcolm kept his cool, and calmly went up stairs and changed into another shirt.
It’s a shame he wasn’t so cool under pressure as PM. But I digress.
The next day, a mini bus, from MariaIslandWalk Coy., collected Marie and I from our hotel, and to get to the island we caught a boat from Triabunna on the mainland, to Shoal Bay, across Mercury Passage. The crossing was quite rough.
Our group walked across McRae’s Isthmus to Riedle Bay and on to our Casuarina Beach camp. (It was an expensive glamping holiday). We settled in and then walked to Haunted Bay, where there were plenty of seals. We also saw wallabies, echidnas, yellow tailed cockatoos and penguins in their nests. While at Haunted Bay a French couple arrived, just wearing thongs (on their feet). And here we were in walking boots.
‘Tragic’ end to day. Beer (Cascade Premium) is not just warm, but hot. I mean, there is no excuse in this day and age – even that day and age – for not having the drinks cold, especially when you have paid a motza.
But the food (scallop risotto) was good, as was the Morningside Cab Merlot.
The next day was the 13km Five Beaches Walk, and our small group was regaled with stories of the indigenous people and French explorers. One of our guides, Geoff Watson, 47, (originally from New Zealand) put ochre on my head at Bloodstone Point.
Lunch at Point Leseuer was tuna and anchovy salad. There was a Russian gentleman filling in his diary under a tree and he reminded me of great English rugby league writer, Dave Hadfield.
Tonight we camped at White Gums, which was just above Four Mile Beach, where we braved the icy waters. Once again the beer (James Boags) was hot!!! So I stuck to Bream Creek Pinot Noir, as we enjoyed grilled quail, lamb chops and sausages.
After dinner we went looking for wombats and found a lovely, blond speciman. (I rarely found lovely blonde specimans, when trawling bars after dinner as a young bloke).
Our group discussed our options for the following day, with Geoff pushing strongly for the rugged Mt Maria climb, which involves a lot of scree scrambling, which was not appealing to me. (Our other guide was Ben Wilkinson, 26, who had played Aussie rules with Coburg).
Overcast conditions saw us abandon the Mt Maria walk, and instead we tackled the easier Bishop and Clerk Peak. Pasta salad for lunch, on top of the sea cliffs.
I’m not a great one for heights, and I found it quite scary on top, but the views of Freycinet Peninsula and Ben Lomond were amazing. The walk was a 13km round trip, which included a stop at the old clay brickworks. During the walk, we chatted to two Israeli males, who had just finished their national service.
Tonight we stayed at lovely 19thC Bernacchi House, where, ‘Eureka’, the beer (Hazards Ale) was cold. The wine which accompanied our crispy skin salmon, was Cape Bernier Cab Merlot 2007, and Frogmore Creek Sauvignon Blanc, 2008.
One of our walkers, Judy Pearson (from Alexandra, Victoria) reminded me so much of Robert’s mother-in-law, from ‘Everybody Loves Raymond’, while another walker, Harry Van Doort (formerly Gosford, now Sandy Bay in Tasmania) reminded me of our nephew, Patrick Lynch. (Well everyone looks like someone). Harry was into classical music.
A knock on the door at 8 a.m. the next day alerted us to a bacon and eggs breakfast. Afterwards we walked to the fossil cliffs in very windy conditions. We left the island ‘early’ because of deteriorating weather. The crossing was quite rough, and Marie did not enjoy it all.
Our driver back to Hobart, Jason, was a real character and recently completed filming for a documentary for Channel 7, on Tasmania – with ‘All Saints’ star, Jack Campbell.
Back in Hobart, I toasted the experience with several beers at the Prince of Wales Hotel, Battery Point – and the beer was cold.
Walk rating – 8/10.
Photos of Maria Island Walk 2009: 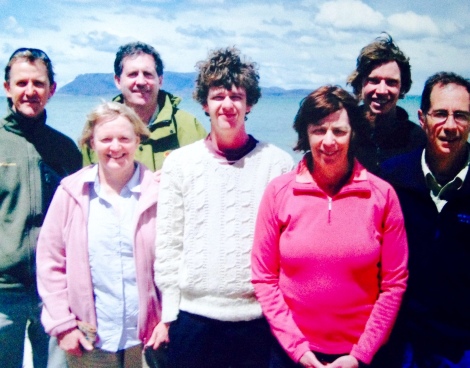 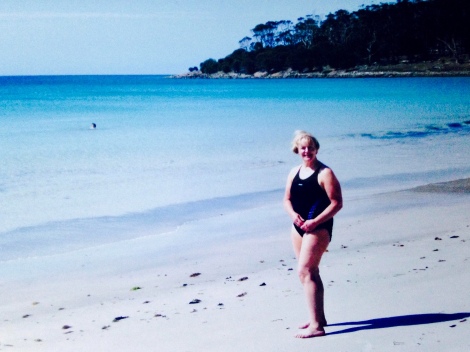 One response to “THEY CALL THE ISLAND MARIA”