My father, Jon Ricketts often mentioned Jack as one of the toughest forwards of all time, and he had the pleasure of meeting the South Sydney skipper in the 1950s.
Jack was born at Coraki, on the Richmond River, not far from Lismore, where my dad (who played for South Lismore) grew up. Jack played rugby league at Lismore High in the 1930s, but played hockey and cricket when the family moved to Sydney.
He took up rugby league again, in Papua New Guinea, when posted there during World War II, with a Queensland regiment (He had enlisted in Brisbane).
After one of those games, he promised an Army mate, ex-international, Eric Lewis, that he would try out for the Rabbitohs when the war ended.
Joining Souths, in 1946 – a year in which the Rabbitohs did not win a match – Rayner played 195 first grade games over 12 seasons.
During that period, with Rayner as captain or captain/coach, Souths won the 1951, ’54 and ’55 grand finals.
Rayner, a policeman in civilian life, toured Britain and France with the 1948-49 Kangaroos, and played all five Tests, three against Britain and two against France.
The great Clive Churchill once described Rayner as the crankiest footballer he ever played with. “But what a grand fellow he was.”
Rugby League News, the official program of the NSWRL, had this to say about Rayner, the day he retired.
“He has been an ornament to the game, with his hard clean play and brilliant captaincy.”
The pre-match build-up to this year’s ANZAC match at the SCG, was, as usual, beautifully done, and reinforced my belief that a marching band is the best form of entertainment at the footy. Sorry Meatloaf.
And it is great to see the players treat events with the respect they deserve, even though some, no doubt, have only a sketchy knowledge of what ANZAC Day is about.
When I covered Australia’s 2004 trip to England and France, for the Tri-Nations tournament that year, coach, Wayne Bennett took the players to Villers-Bretonneux before they headed to Toulouse for a Test against France.
One player – who shall remain nameless – admitted to me he knew nothing about our troops’ deeds and sacrifices in World War 1, which absolutely stunned me, because this bloke was no dummy.
In England, the Rugby Football League has formed a close bond with the defence forces, and the Navy, Army and Air Force all enter teams in the Challenge Cup knock-out competition.
My uncle, Tom Dunne fought on the Somme (and survived) and in World War II my uncle, Les Kelly, a good cricketer, was a prisoner of war of the Japanese for three and a half years. Another uncle, Wally Smith, was a commando in World War II.
My wife, Marie’s uncle Ray Geraghty was executed by the Japanese after the Fall of Singapore. He was just 17.
In his column, for FoxSports, Roosters’ skipper, Boyd Cordner spoke of the impact his visit to Villers earlier this year, had on him.
Roosters’ coach, Trent Robinson, whose wife is French, took the Roosters to the battlefields of northern France, before they headed to England to play the World Club Challenge. It was fitting that Cordner should win the Ashton-Collier Medal in the 2019 Anzac Day victory over the St George-Illawarra.
Footnote: My father, met my mother, Lola Mary Kelly, at the ANZAC Day Sports in Lismore. 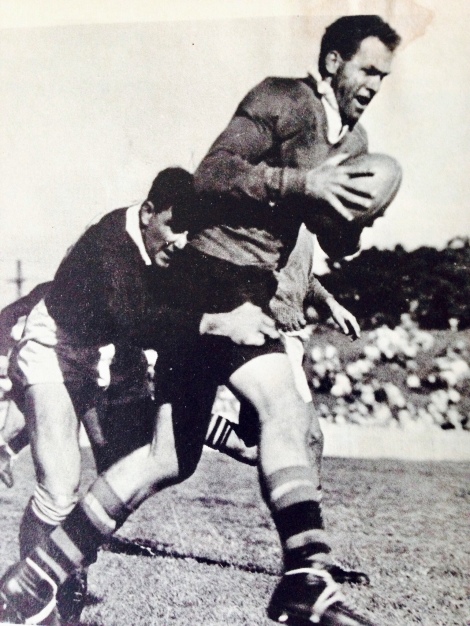