DIARY OF A RETIRED RUGBY LEAGUE WRITER
WEEK 15 2018
WEDNESDAY, APRIL 11
Valleys’ rugby league legend, Ray Edwards, has passed away. His daughter is 4KQ Breakfast host, Laurel Edwards. Ray won a Brisbane premiership with Valleys in 1955, when they beat Brothers 17-7 in the grand final. Former international, Fred ‘Firpo’ Neumann was coach and Norm Pope the skipper.
On the way home from Stafford Tavern, walking along Kedron Brook, I stop to watch a woman berate four young blokes about their (alleged) threatening behavior towards her daughter. To their credit, they cop it. I didn’t see what they did.
Learn of the passing of former All Blacks’ rugby union fullback, Fergie McCormack. I remember watching him, on television, as a kid, and thinking how pedestrian he looked, compared to our rugby league fullbacks. But he was a  very good kicker.
THURSDAY, APRIL 12
News breaks that Broncos’s forward, Matt Gillett could be out for up to 12 weeks with a fractured neck. My spies tell me that one of the reasons Kevin Walters quit the Broncos’ coaching staff, was that he felt they weren’t training hard enough. He wanted them to train, and play, more like Melbourne Storm, where he was once on the staff.
South Sydney have been recognised by the National Heritage Trust, something that would have thrilled my late mum, Lola Ricketts. It certainly pleases my wife, Marie.
FRIDAY, APRIL 13
Queensland’s ‘Mr Fruit’, Gavin Scurr, from Pinata Farms, is my interview subject at Beer and Beef Club lunch at Ship Inn Hotel, South Bank. Sirromet’s sales and marketing manager, Michael Muzza says the new chef at Lurleen’s Restaurant, at the winery’s Mount Cotton complex, wants to see the place ‘hatted’.
At Stafford Tavern, former Queensland Residents’ winger, Gerard Kerr cries on my shoulder about wingers getting a raw deal, certainly in days past, as being ‘blokes who hang around with footballers’. Former Brisbane Brothers’ Second Division forward, Adam Crear plays for Easts against Northern Pride in Cairns, in the Intrust Super Cup.
FoxSport’s Brenton Speed is a true professional, in that he does his homework, and is accurate with his calls. But he is, what I term, a ‘generic caller’, in that he transfers his skills from rugby league to Australian rules to soccer, and maybe rugby union (not sure about latter). Give me Ray ‘Rabbits’ Warren or Andrew Voss any day, when it comes to rugby league, because you know they are passionate about the code they are calling, and don’t have to rely so much on the cliches, which transfer from one sport to another. It’s like many of our professional sports administrators. Deep down, they might love another sport, but they have to spruik the sport which employs them. Raelene Castle is an example. Her dad, Bruce captained New Zealand in rugby league, and now she is the boss of rugby union in Australia.
SATURDAY, APRIL 14
North Queensland Cowboys suffer their fifth loss in a row, this time at the hands of Canterbury, in Townsville. FoxSports commentator, former Test halfback, Greg ‘Brandy’ Alexander said last week he felt Cowboys’ skipper, Johnathan Thurston may have played one year too long. Maybe he was right. After the game, it was good to see players just shaking hands, like men used to, instead of all this false hugging.  Thurston’s head gear is the most famous in sport in Australia, but fellow indigenous stars, Steve Renouf and Matt Sing had strong followings as well. They just weren’t in a position to give away their head gear every week.
SUNDAY, APRIL 15
Pleasant afternoon at Brisbane’s South Bank, sharing stories (at Charming Squire) with my sister, Gay Lynch; her husband, David; their children, Patrick and Eliza; my youngest brother, Stewart and Gay’s friends, Gary and Lenice. Back at the Lynch’s apartment we watch the (woeful) Commonwealth Games closing ceremony.
Noted rugby league commentator, Mark Braybrook called the Commonwealth Games Rugby Sevens. So many league names in the Australian Women’s side  – Caslick, Cherry, Greenshields among them. On her last day as a Games volunteer, my wife, Marie saw Australian actor, Simon Baker. Marie’s niece, Sonya Pope, a prominent softball player (and mother of three) from Lismore, turns 40 today. 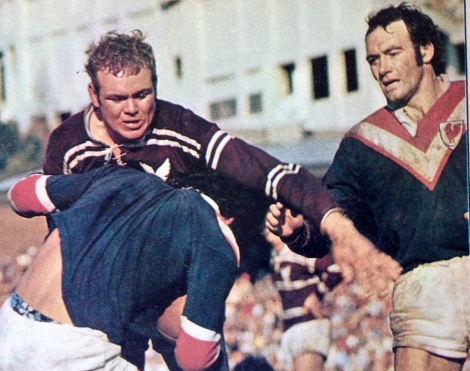