JUNE 2009
‘We’ll get through this mate,” Nate Myles said to Dallas Johnson, as they caught the lift to the foyer of the Parramatta hotel, where the Queensland team was staying, ahead of the return State of Origin match against New South Wales at nearby ANZ Stadium.
The Queensland team had been ravaged by illness, a stomach bug which saw players stripped of weight and energy.
I shared the lift with Myles and Johnson, the players (along with skipper, Darren Lockyer) worst hit by the virus, and they looked pale and gaunt. But, above all else, they looked like men on a mission. They had fire and resolve in their eyes, and I was invisible to them – which, of course, is not unusual, when players stumble across rugby league writers.
The stomach bug wasn’t something the Queensland camp had broadcast to the world. They didn’t want to be making excuses ahead of the contest.
Queensland had won the first match, 28-18 in Melbourne, and NSW with David Williams, Glenn Stewart and Josh Morris making their debuts, were favorites to square things, in Sydney.
The Blues struggled for much of the match, with Qld leading 18-0 after 23 minutes, thanks to tries to Israel Folau, Greg Inglis and Lockyer. The score could have blown out to 30 by halftime, it not for two video referee decisions which proved favorable to the Maroons.
So Qld led only 18-10 at halftime and the Blues had every chance to surge to victory, given the stomach bug had to drain the energy of their rivals. And Qld had lost centre, Greg Inglis, who was concussed in a Trent Barrett tackle. Before long, Sam Thaiday, Ash Harrison, Ben Hannant and Petero Civoniceva were all affected by injury.
Williams scored a try, for the Blues to trail only 18-14, but Qld hooker, Cameron Smith crossed to seal a famous victory.
Man of the match was Sam Thaiday.
The Queensland forwards, led up front by Civoniceva and Steve Price, were simply magnificent, with coach, Mal Meninga comparing the Maroons’ performance with some of the great efforts he was involved with, as a player, in the 1980s. 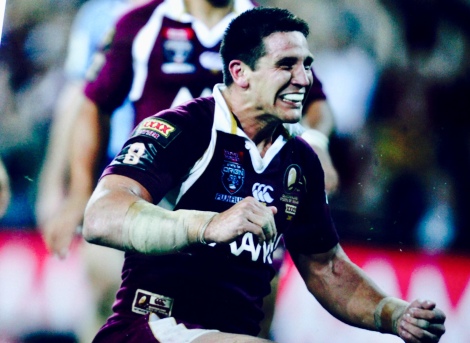