Rocket fuel! That best described the liqueur I shouted 43 fellow Australians (and one Welshman), in a posh Strasbourg restaurant, one October night in 1994.
My intentions were good. My wife, Marie and I had holidayed in the Alsace Lorraine Region in 1990 and tasted some of the best liqeuers known to human kind.
At the end of a grand dinner, in our eatery in the Petite France sector of the city, I dug into my expenses pouch, and asked the head waiter to deliver a few bottles of what I thought were the same style of (nut) liqueurs Marie and I had enjoyed four years earlier.
Well. You should have seen the expression on the faces of my group, as they took a sip. The restaurant allowed us to take the bottles with us, but they remained untouched for the rest of the trip, even though we had a ‘bar’ on our coach. Eventually,  I was able to give the ‘bootleg’ grog away to a grateful Irishman, in Galway.
The 1994 tour, of which I was the fearless leader, had started in Rome, and was wending its way north, in time for us to arrive in London ahead of the rugby league First Test between Great Britain and Australia at Wembley.
My 44 strong group, made up largely of supporters, ex-officials and ex-players from Brisbane Souths and Easts clubs, had enjoyed two nights in Rome, then one night in Florence (after a tour of a Tuscan winery – see ‘The Delights of Tuscany’ on this website).
From Florence we drove to Venice, for two nights, where out hotel, on the Grand Canal, had erratic bar opening times, forcing our group to bring in their own supplies, a cause of angst for the hotel proprietor. Well, he had his chance to profit from our stay.
Next, there were two nights in Salzburg, Austria, where our group discovered the Augustiner-Brau, which served wholesome food, and good beer.
Following a night in Innsbruck, and two in Lucerne, we drove to Strasbourg, along the Route de Vin, the ‘romantic’ road which dissects vineyards famous for producing Rose and Riesling style wines.
I was flush with cash, because our intended European guide had broken his leg, ski-ing. (I was always going to lead the British section of the trip, being a noted Anglo-file, but acceded to the request from our travel company, to allow a multi-lingual guide to look after Europe). When he broke his leg – I think it was a he – it was all up to me.
When I met our Welsh coach driver, Johnny, in Rome, he handed me a bundle of cash, for incidentals, tips etc. In Venice, for instance, we had to pay for our luggage to be ferried along the canal system.
When I played football, I never received payment, in a brown paper bag. But it was nice to get this little bonus on a football supporters’ tour. 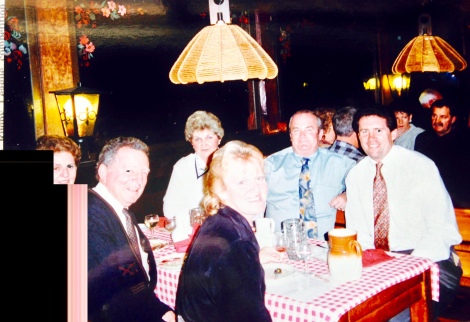 Photo 2: Steve Ricketts hops into a pork knuckle, beside his wife, Marie at Augustiner-Brau, Salzburg, while Dennis Stirzaker downs an ale, That’s Don Munro on the left.