People watching can be the best form of entertainment, and it’s often free.

Rarely have I enjoyed a night of people watching more than an unexpected bonanza in a bar/tabac in Nice, France in October, 1997.
My brother, Stewart and I were staying in Nice, on our way north to Montreux in Switzerland.
After battling peak hour traffic to find our hotel, in Nice’s old quarter, we explored the surrounding streets.
I have always regarded bar/tabacs as the best places for a cheap beer, and this one didn’t disappoint.
We plonked ourselves down the back, at the bar, and savored a few ales.
Every five seconds, or so it seemed, someone would come in to buy cigarettes, and usually they had pulled up on a motor scooter, out the front of the premises.
And they were all so friendly, with their smiles broadening even more when they received their ‘poison’ of choice.
After 30 minutes or so, Stew and I were having bets about how long it would be before the next customer. I think 25 seconds was the longest wait, and that was late in proceedings.
Very few people came in to have a beer, which we didn’t mind, as the bloke behind the counter was flat out keeping up with our demands.
This particular trip was, for me, a reconnaissance mission ahead of my rugby league supporters’ tour, which was to travel to Britain and Europe in 1998. For Stewart, the youngest of my five siblings, it was his first overseas trip, and I was effectivelly his guide.
We had started in Madrid where we spent two nights; then Barcelona, also for two nights (see ‘What Now for Fringe Players’ on this website).
From Barcelona, we had caught a train to Narbonne, and then another train to Carcassonne, where we spent a night. In Narbonne, which has hosted a number of rugby league matches, there were rugby union posters, and in one bar, a photograph of the Wallabies.
In Carcassonne, Stew and I stayed at the Mercure, right next door to the old city. An American Express tour group, with a female (American) tour leader, also was staying at the Mercure. She had her meal with the coach driver, rather than the group.
Stew and I explored the ‘Cite’, from where you can see the Stade Domec, where ASC Carcassonne rugby league play their home games.
In the other direction is the town of Limoux, another rugby league stronghold.
From Carcassonne, we drove north to Castres, through beautiful wooded hills where military exercises were underway. After exploring Castres, the birthplace of former French rugby league hard man, Marcel Bescos (an antique dealer),  we drove to the Pont du Gard (Roman aqueduct) which my wife, Marie and I had visited in 1978, and I had seen again in 1989, when covering the Queensland Residents rugby league team’s tour of France.
Stew and I stayed the night in Avignon, where we found a bar run by an Anglophile French woman. There we chatted to a couple of Kiwis travelling around in a rusty old Kombi van. They were rugby union types, but one of them had a relative playing league in Avignon, so we were able to have a civilised conversation, and by the end of the night they knew all about the likes of French league legends, Puig Aubert, Jon Dop and Jean Barthe, the latter the only man to captain France in both rugby codes.
Jean also owned a bar/tabac. 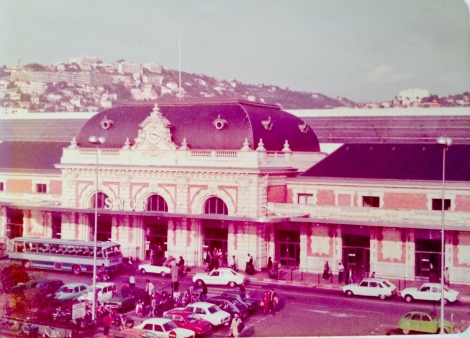