It’s an interesting discussion point, and one that is explored by independent journalist and author, Joe Gorman in his latest book, ‘Heartland’.
Brisbane born, but resident in the Blue Mountains in New South Wales, Gorman’s first book, ‘The Death and Life of Australian Soccer’, was listed for a Walkley Award.
Gorman saw rugby league as the best starting point for trying to understand what makes Queenslanders tick, what makes them different from other Australians.
In ‘Heartland’, Gorman chronicles the decline of the Brisbane club competition, and North Queensland’s Foley Shield, as well as the rise of the Broncos and Cowboys, and the enduring appeal of State of Origin.
I know for a fact, that Gorman put in the hard yards to write this book, traveling extensively in Queensland and interviewing a myriad of characters, including some at my local pub.
He was a guest at a meeting of the Queensland Rugby League History Committee (of which I was secretary at the time, and now chairman) and  was afforded substantial support from our members.
It is a book which tackles some of the tough issues, such as racism, parochialism, greed and violence.
‘Rugby League enabled indigenous Queenslanders to identify – however briefly – with the sons of police officers and white landholders. And for whitefella Queenslanders to rejoice, even if only for 80 minutes, in the success of blackfellas,”writes Gorman.
Test prop, Sam Backo is the son of the late Dr Evelyn Scott, a legendary indigenous activist from North Queensland.
Sam grew up at Ingham, but had played most of his senior football in Canberra, when he was first mentioned as a Queensland Origin contender, in 1987. When the media questioned his eligibility for Origin, he responded angrily that he was a proud Queenslander.
“The only good thing to come out of New South Wales, is the road north,” he quipped.
Gorman also touches on North Queensland’s legendary Daisy brothers, Vern and Frank.
Parramatta coach, Jack Gibson offered Vern a contract, but he told the ‘super coach’ he didn’t like the city, and he saw out his playing career in the north.
“Vern was a pretty rough, tough, son-of-a-bitch,” former Test prop, Greg Dowling, another North Queenslander, told Gorman. “He was probably the most feared guy in North Queensland, back in the day. Feared, not just for his aggression, but his playing skills. Wherever he went, the winning rate would have to be 90 percent.”
Vern Daisy’s nephew is Scott Prince, who won a NRL title with Wests Tigers, and played for Queensland and Australia.
‘Heartland” is published by University of Queensland Press. 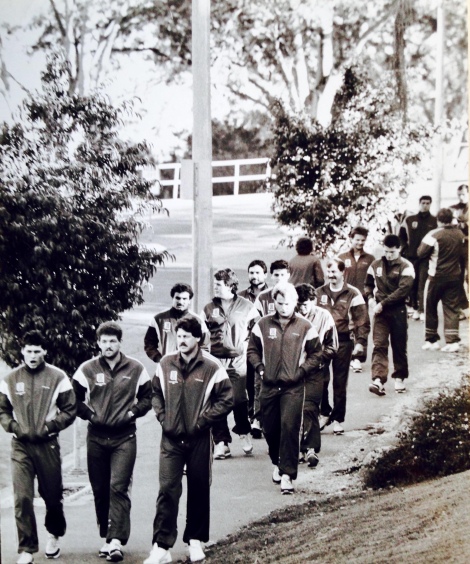 Photo 2: The embodiment of Queensland – its State of Origin side, with Bob Lindner, Greg Dowling and Gene Miles leading a morning walk.