JULY 1959
A halftime oxygen boost may have played a roll in North Queensland’s come-from-behind, 41-33 win over South Queensland in a State rugby league ‘trial’ in Townsville, watched by a capacity crowd at the Sports Reserve.
South Queensland led 19-8 at halftime, and looked by far the better side, with the North Queenslanders looking ragged at best.
So, sensing that something drastic needed to be done, team manager, Allan ‘Stumpy’ Lawrence, fed his boys oxygen during the break.
Lawrence, the father of future swimming super coach, Laurie Lawrence, was manager of the Tobruk Baths in Townsville, and adopted the method from Olympic swimming coaches, who used his pool for winter training camps.
The revitalised North Queenslanders took control of the game, soon after play resumed.
North Queensland fullback, Paul ‘Pappy’ Pyers kicked seven conversions from nine shots, while Townsville Test prop, Jim Paterson scored two tries. Paterson was voted North Queensland’s best, while Test halfback, Barry Muir won the South Queensland equivalent. Lock, Joe Baker and second rower, Brian O’Connor were also outstanding for South. (Baker would go on to found the University club in Townsville).
Five eighth, Bobby Cook from Ayr, also played outstanding football.
Referee, Fred Faithful, from Cairns, penalised the visitors 20-9.
Test fullback, Clive Churchill, captain-coach of South Queensland, was in no doubt that Great Britain would win the 1959-60 Ashes series if Australian players did not improve their tackling. He said the trend to high scores in the code, was due to the fact tackling was a lost art.
The Australian selectors already had enough to worry about with internationals, Ian Moir, Norm Provan, Kel O’Shea, Dick Poole and Ken Kearney having ruled themselves out of tour selection, for family and/or work reasons.
Moir said he was as keen as ever to play Test football, but he could not justify being away for four months, on the money allocated to the players.
A week earlier, in Brisbane club football, Wynnum-Manly defeated Norths 12-10 in the Presidents Cup final at Lang Park. It was Wynnum’s first trophy win since entering the A grade competition eight years earlier.
Wynnum’s stars were forwards, Bob Greenhill and Jim Thompson, while captain-coach, Churchill was Norths’ best. Churchill brought off three deadly, low tackles, which stopped certain tries.
Easts, with halfback, Stan Neave at his scheming best, beat Wests 26-18 on a Davies Park dust bowl, the Tigers’ first success against the Panthers since 1953.
In the Saturday Lang Park match, Valleys captain, Norm Pope scored a try in the corner in the final minute, and then converted, for a 24-23 win over Souths. Fullback, Pope kicked six goals from seven shots and became the first Brisbane player to top 100 points for the season.
Souths’ halfback, Bob Cory, a former rugby union star, was the best player on the field. Souths’ forward, Don Townsend kicked seven goals from eight shots. 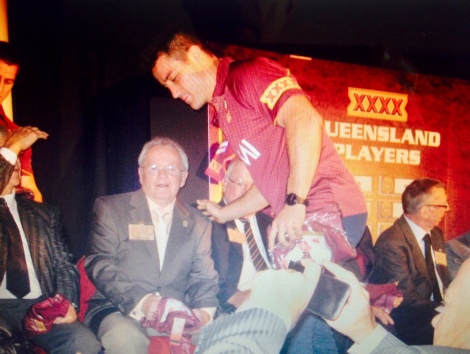