SEPTEMBER 1989
Valleys five eighth, Peter Coyne, a controversial omission from the Queensland Residents team for the historic tour of France, turned in a classy performance for the Diehards in a 20-18 win over Easts in the Brisbane Rugby League major semi-final at Lang Park.
Coyne’s superb passing and kicking game was complemented by halfback, Brett Daunt’s running game and slick service.
Valleys led 10-2 at halftime, and then surged to a 16-2 lead after hooker, Bill Holmes darted from the dummy half on the last tackle and put winger, David Bourke over for a try.
Holmes had scored himself in the first half, leading from the front and justifying his selection as skipper of the Maroons’ touring side. A Pittsworth product, Holmes finished his career as, in my view, one of the best hookers not to play NRL, or NRL equivalent, and he was certainly a better player than many men who played at that level.
Fullback, Steve Hegarty was Valleys’ captain in ’89, but Holmes gor the nod for the French tour.
Valleys began in fiery fashion, with second rower, Richard Boys and centre, Darryl Pitt sin binned by referee, Ian Irwin within a minute of each other.
Even though Valleys were down to 11 men, they scored first, with lock Tony Catton crossing for a try in the 14th minute.
Easts coach, Des Morris described the Tigers’ performance as ‘pathetic’.
Valleys’ coach, Ross Henrick was more interested in taking the State selectors to task, saying he could not understand how Richard Boys missed out on a spot for the French trip.
At Tweed Heads, the local Seagulls outfit beat Southport 26-16 in the Gold Coast Group 18 grand final at Seagulls Stadium, West Tweed Heads.
Seagulls captain-coach, John Harvey, one of the stars of the match, said the win was a fitting end to his career after playing with Easts and Manly in Sydney and representing New South Wales.
Man of the match was Seagulls’ hooker, Eddie Fallins, a local junior.
At Nambour, centre, Willie Carne and halfback, John Plath led a Broncos Colts scoring spree with three tries each in a 62-0 thrashing of Nambour Crushers in the Sunshine Coast major semi-final. The colts scored 12 tries with former Nudgee College rugby union star, Bob Conway kicking seven goals.
In Toowoomba, All Whites (now Brothers) beat Millmerran-Institute in the major semi. 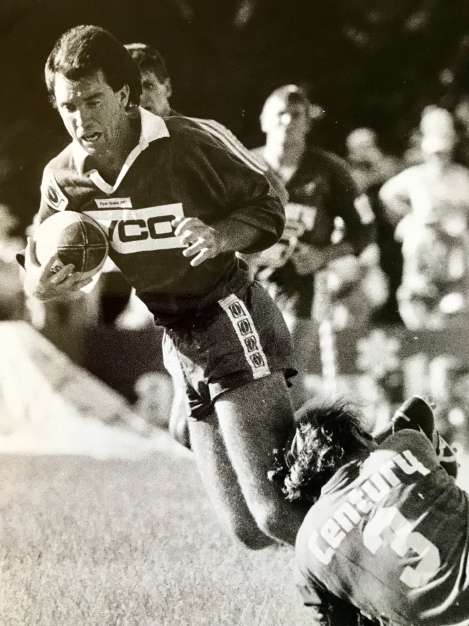