Now, I should point out that Jack was my uncle, and Jon my father.

Jack, a barber, with a shop at North Lismore, looked after cyclists, rugby league players and boxers at his Magellan Street residence. Boxing was his first love.

My father was a speedster, who scored 33 tries in one season with Woodlawn College and then made the Richmond District representative senior side, from the South Lismore club.

He had never been classically trained as a runner, and Jack, who liked a punt, reckoned with a bit of coaching, he could make his mark at the Stawell Gift, Australia’s most famous professional race.

It never happened, as things transpired – work, marriage and kids got in the way – and it was one of my father’s regrets that he did not head to Victoria to have a go. (Jack Cann from Broken Hill won the 1949 Gift).

So when my wife, Marie and I stayed in the Grampians in Victoria in November, 2012, I was determined to make a day trip to Stawell to see the famous ground where the race takes place.

School kids were playing on the oval when we arrived, which I thought was a wonderful use of the amenity. I imagined the place full of excited fans on the day of the Gift.

I have seen the Gift live on television a number of times, and it really is one of the great sporting events on the Australian calendar. Long may it thrive.

Marie and I had been to the Melbourne Cup with my sister, Gay and her husband, David Lynch in 2012. I had retired as a rugby league writer just two weeks after covering my last grand final – a 14-4 victory by Melbourne Storm over Canterbury-Bankstown.

Storm skipper, Cameron Smith attended the Melbourne Cup and posed for a photo with my wife; Gay and Davo.

When we left Melbourne, Marie and I stayed at the famous Royal Mail Hotel, Dunkeld where I had bone marrow for entree followed by Milaway free range chicken, while Marie skipped entree and had lamb shank for mains, followed by bread and butter pudding. The food was excellent, and there was nothing pretentious about it, or the venue, despite its reputation.

Continental breakfast was all local stuff, except for the oats, which were from Gunnedah in New South Wales.

On the way to Hall’s Gap we climbed Mount Abrupt for the views, followed by Silverband Falls (where there was stark evidence of the 2010 floods) and then the ‘Grand Canyon’.

We booked into D’alton’s Studio Cabins at Halls’s Gap. The manager, Dave, was off to the Gold Coast on a golfing holiday. (There are two D’altons on the local war memorial).

The next day we walked the Pinnacles, then trekked to spectacular Boroka Lookout, where a wedding party was gathering. Finally we made our way to ‘The Balconies’, where a French couple risked life and limb for a photograph.

On day three we did all the little walks at McKenzie Falls, where a fellow walker threw his cigarette butt into the bush. At Beehive Falls a couple walked their dog in the National Park.

The Kookaburra Cafe was our watering hole at Hall’s Gap. The manager had had a charisma by-pass, but the female bar staff, one a Russian, were some compensation. We ate there one night (cassoulet -moi; duck – Marie) and the food was good, not great.

From Hall’s Gap, we were to head to Echuca on the Murray River.

More at a later date.

Photo 1; Gay and David Lynch with Marie Ricketts at the 2012 Melbourne Cup 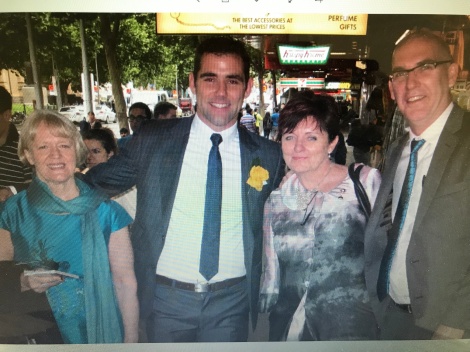 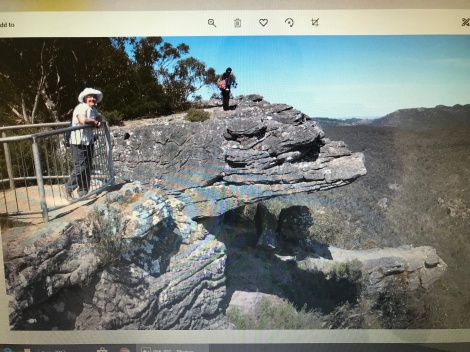