OCTOBER 1984
Hull Kingston Rovers’ winger, Garry Clarke scored three tries for England in their 28-9 win over Wales at Ebbw Vale. Clarke, still a teenager, had snared a hat-trick for the Great Britain under-24 side against France earlier in the year, and was rated a superstar in the making.
His most spectacular effort against the Welsh came from an interception of a pass by five eighth, Danny Wilson, with Clarke racing 75 metres to score untouched between the posts. (Clarke went on to play three Tests for Great Britain – all against France).
Wilson was both brilliant and erratic, but did enough to be named Wales’ player of the match, just nudging winger, Phil Ford for the honor.
The match was televised live throughout Wales, with the home side determined to put on a good show under manager-coach, David Watkins, a dual rugby international.
England’s man of the match was Oldham forward, Andy Goodway.
Debutant forwards, Hugh Waddell (Blackpool Borough), Andy Kelly (Hull KR) and Milton Huddart (Whitehaven), had quiet games for the English. Huddart is the son of legendary former Great Britain forward, Dick Huddart who won a Sydney premiership with St George in 1966 after playing 16 Tests for Britain between 1958 and ’63.
England were captained by five eighth, Steve Donlan from Leigh, while Trevor Skerrett (Hull) captained the Welsh. 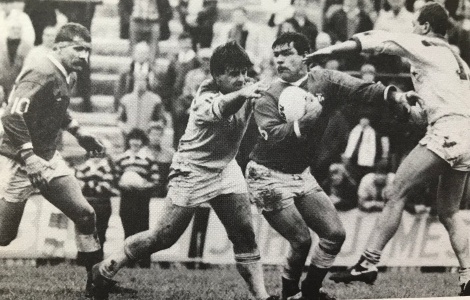