CELEBRATED spa town, Harrogate one night; former coal mining borough, Leigh in Greater Manchester the next.
Such is the lot of rugby league writer based in northern England.
It was 1982, and Brisbane’s ‘Telegraph’ newspaper had assigned me to cover the Kangaroo tour of Britain, with my base for most of the trip, the Dragonara Hotel in Leeds, although there also were stays in Carlisle, Cardiff and London.
Other journalists on the trip included Geoff Prenter (Sydney Sun) and Peter Frilingos (Sydney’s Daily Mirror) and the three of us headed to Harrogate for dinner at Hodgson’s Restaurant in the Russell Hotel. The food was brilliant and I lashed out, having three courses – Mediterranean prawns; leek soup and then lamb pancakes. Prenter was not fussed with the service and let the wait staff know it.
Harrogate has a lovely, spacious air, thanks to extensive gardens, parks and stretches of grassland, such as ‘The Stray’, an area of 200 acres. I wish some of the parks in Brisbane were spacious like this, and not, what I describe, as cluttered. Keep it simple. Give the place a country look, in the city.
Back at the Dragonara, the players were disgruntled because a function, put on for them by the manager of their favorite night club, Digby’s, had not lived up to expectations. It was held at a place called ‘Alias Smith and Jones Food Emporium’, and evidently there was an absence of food.
The players involved in the match against reigning English champions, Leigh, the following night, had abstained from alcohol, intent on maintaining the tourists’ unbeaten run, with the most recent victory a 40-4 thrashing of Great Britain in the First Test in Hull.
On the day of the match at Leigh, I enjoyed lunch at the home of Ray and Muriel Fletcher in Leeds. Ray and Muriel had twins, a boy and a girl, with the boy supporting Leeds United soccer and Bramley Rugby League. Ray, the chief league writer for The Yorkshire Post and originally from Hull, played tapes of the 1980 Test series between Britain and the touring Kiwis, with the First Test a 14-14 draw at Wigan, while the Kiwis won the Second Test 12-8 at Bradford. Britain won the third Test 10-2 in Leeds.
I traveled to Leigh with Prenter; 2UE’s John Brennan and Alan Marks from the ABC. The traveling media pack were less than impressed with seating arrangements at Hilton Park, Leigh – there were none. We watched the action from the terraces, as part of crowd of 7,680, just about capacity.
Queensland skipper, Wally Lewis, who did feature in the First Test, captained the mid-week side, with John Ribot, Chris Anderson and Paul McCabe each scoring three tries, while John Muggelton got two and Lewis one. Mal Meninga landed only three goals from 10 shots, while Lewis, who was named players’ player, kicked one from two.
Referee, Trevor Court from Leeds, sent off Australian prop, Rod Morris and Leigh’s Edwin Hunter in the second half.
Centre, John Henderson was Leigh’s best, while Test winger, Des Drummond also played well. Drummond and Ribot had a fine duel, although at one stage Ribot lifted Henderson into the air and looked likely to throw him into the crowd, until common sense prevailed.
Leigh’s coach was former British Test hooker, Colin Clarke, whose son, Phil also would go on to represent Britain, and today is a commentator for SkySports coverage of Super League.
We drove back to Leeds in thick fog, but it wasn’t thick enough to obscure the sight of the Australian players relieving themselves on the side of the Motorway. When you’ve got to go….
The day after the First Test I had attended a club match between Leeds and Hull Kingston Rovers at Headingley, sharing a cab to the ground with former Australian team manager, Ralph Stafford from Brisbane. (He was off to Denmark the following day).
I was invited to the board room at Headingley, before and after the match, (won 19-17 by Leeds) and had the honor of meeting the great Roger Millward, coach of Hull Kingston Rovers, and one the finest players ever to represent Great Britain.
I got a lift back to the Dragonara with Australian Rugby League chairman, Kevin Humphreys, arriving in time for coach, Frank Stanton’s press conference.
Stanton wasn’t happy with my line of questioning about the omission of Wally Lewis and Queensland prop, Rod Morris from the Test side.
Relations between Frank and I had been tense from the start, with Stanton declaring, as he saw me enter the team hotel in Cardiff, at the start of my assignment – ‘Ricketts. I’m sueing you’.
I had no idea what he was talking about.
Turns out he was contemplating legal action against Queensland Newspapers, more particularly the Telegraph’s sister paper, The Courier-Mail, about something The Courier’s chief league writer, Lawrie Kavanagh had written about the reasons behind Stanton not seeing out his contract as coach of Redcliffe Dolphins.
Lawrie wasn’t concerned, and he enjoyed the tour. I dined with him, Frilingos, Prenter, Ray Cheserton (Sydney Telegraph) and Robert Smith (Australian Associated Press) at Jiggolos in Leeds, 48 hours after the First Test.
It was great night (although Lawrie complained about the wine being warm) and we all finished back at the Dragonara piano bar, singing ‘I Still Call Australia Home’, with Australian supporters, one of whom – Max from Castle hill – was travelling around Britain on a rail pass.
Great days, although not for the Poms, who were being given a spanking by our elite squad of football athletes.

1 Wally Lewis in the thick of the action 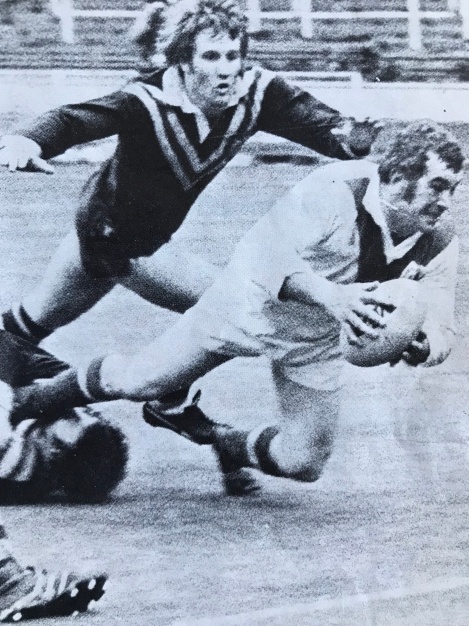 3 Leigh coach, Colin Clarke scores for Britain against the Aussies in 1973.

One response to “SPA TOWN TO A SPANKING ”