FLASHBACK JANUARY 1965
After their disastrous rugby league tour of Australia and New Zealand the previous year, France were keen to start 1965 off on the right foot with a good display against Great Britain in Manchester.
France had already beaten Britain 18-8 in Perpignan, on December 6, 1964 and were out to prove they could win away from home. They displayed plenty of fight, but it was the same result, with the British winning 17-7.
The 1964 French side, captained by Bernard Fabre of Villefranche-de-Rouergue, won just 15 matches from 35 ‘down under’, and lost all three Tests in Australia, and in New Zealand. Fabre did not play a Test in Australia, because of injury, with Jean Pano from Villeneuve-sur-Lot the captain in the First Test and Claude Mantoulan (Catalan) the skipper in the Second and Third Tests.
The 1951 and ’55 French sides had won their three Test series in Australia, and in 1960, the French drew the series. The First Test in 1960 was a draw; Australia won the second and France the third.
So the 1964 team’s failures were the cause of much consternation back in France, even to the extent of the Government, through it’s Sports Ministry, calling for a ‘please explain’, given the 13 man code relied heavily on Government grants.
France conceded only one try in their 17-7 loss at Swinton (Manchester) in January, 1965, with Neil Fox kicking seven goals for the home side. The try was scored by Welshman, Berwyn Jones. France’s try was scored by Guy Bruzy, with fomer rugby union international, Pierre Lacaze kicking two goals.
So there were encouraging signs for the French, who had further successes against the British in 1966 and ’67, before drawing one and winning two Tests against the 1967-68 Kangaroos.
In 1968 France beat Britain and New Zealand to reach the World Cup final against Australia, going down 20-2 at the Sydney Cricket Ground. In 1970, France beat Australia in a World Cup match at Bradford. French Government officials were satisfied the 13 man game was back on a solid footing. 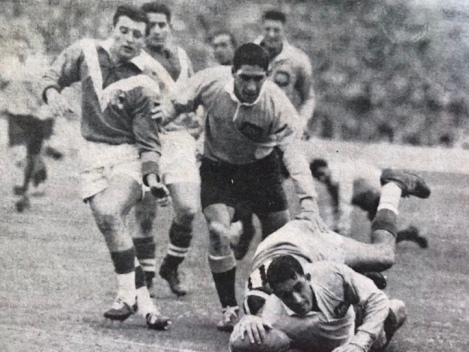 <pics>Ian Walsh scores for New South Wales against the 1960 French side.