TRAVEL
“What a load of rubbish” the crowd chanted, after Australian rugby league centre, Brett Kenny threw a loose pass at Headingley Stadium, Leeds in a match against the local club side, then known as the Loiners.
It was the worst thing the fans could have done, because, after that, Kenny pressed the go button and destroyed the opposition as the Kangaroos steamrolled Leeds 40-0.
From the scrum which followed Kenny’s errant pass, the Parramatta star sprinted into open spaces to set up dual international, Michael O’Connor for one of his two tries.
I was covering the tour for Brisbane’s Telegraph newspaper, with my wife, Marie accompanying me for the early part of the campaign.
Brothers’ utility, Vince O’Brien and Brisbane Wests’ five eighth, Steve Weiss were on the same flight to London as Marie and I, as well as Brian Stirling and his wife. Their son Paul, was manager of Brothers’ Leagues Club, Grange, in Brisbane’s inner north.
My wife and I had time for a southern England sojourn before heading to Leeds, and we drove around Royal Berkshire, before booking into our hotel at Faringdon, Oxfordshire.
We walked along the Thames at Windsor; then through a wood in the middle of Berskhire, followed by an Arkells Bitter (moi) at a pub called the Blue Boar. Arkells is a beer brewed in the adjoining county of Wiltshire.
Afterwards we walked around the hills overlooking Goring Gap, one of the most scenic areas on the River Thames’ journey to London.
On our walk we met a chap who was the spitting image of actor, John Gielgud. I asked him if he was indeed John Gielgud, and he didn’t deny it. Should have got him in a selfie, but of course, they didn’t exist then.
In Faringdon we stayed at the 17thC Bell Hotel, in the main square of this lovely market town.
In Leeds we stayed at the ‘modern’ Dragonara Hotel, with the Australian team, and a large media contingent.
The match against Leeds was a disappointing spectacle for the 10,974 fans, who left the ground despondent about the chances of the national side in the three Test campaign. (Leeds fielded two young Australians in the centres – Andrew Ettingshausen and Mark McGaw – who both would go on to play for Australia).
British coach, Maurice Bamford had already announced his team for the First Test at Old Trafford, Manchester, with Hull Kingston Rovers’ hooker, David Watkinson the skipper. Watkinson had toured Australia with the 1979 Great Britain side, but missed out in 1984. Castleford’s Tony Marchant, who spent an off-season with Wynnum-Manly in the Brisbane competition, was named on the wing.
The team was: Joe Lydon; Tony Marchant, Garry Schofield, Ellery Hanley, Henderson Gill; Tony Myler, Deryck Fox; Kevin Ward, David Watkinson (c), John Fieldhouse, Lee Crooks, Ian Potter, Andy Goodway. Res.: Shaun Edwards, Andy Platt.
Perpignan postman, Julian Rascganeres was appointed referee for the three Test series.
“We know his style very well,” said English league official, David Howes. “He does not have the normal Gallic temperament, and is not rattled by the big-match occasion.”
The tour matches were televised back to Australia by Channel 0 (later Channel Ten), after a hew hiccups, particularly in Brisbane, where Channel 0’s Mike Lattin went public to reassure league fans they would see the state’s most popular code, with the state’s most popular sportsman (Wally Lewis) in action from the UK. The station had been ‘lazy’ about scheduling the matches, until there was an outcry from fans and the media. I think the people in charge thought the world revolved around Aussie rules.

1 Steve Ricketts in a Berkshire wood 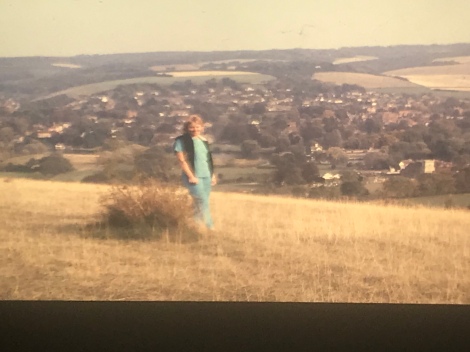 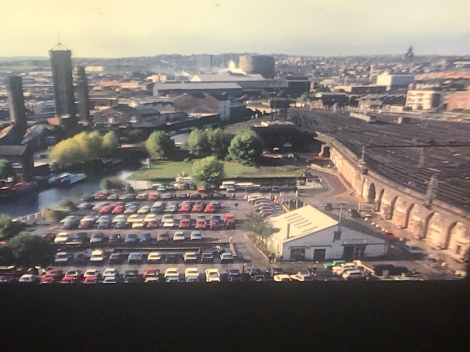 6 Great Britain captain, David Watkinson (right). Ellery Hanley is at the wheel of the golf cart, with Lee Crooks the passenger

7 The Great Britain team photograph 1986. How many players and officials can you name?