VALE TONY BRANSON
From all accounts, Tony Branson was a quiet country lad, who felt uncomfortable with all the media and public attention that came with being a rugby league star.
Originally from Nowra, on the South Coast of New South Wales, he played eight Tests for Australia between 1967 and 1971.
Branson, a panel beater, rose to prominence as a member of the NSW Country side which beat City at the Sydney Cricket Ground in 1967.
Country were coached by former Test winger, Brian Carlson and captained by Maitland legend, Terry Pannowitz.
Brisbane Brothers’ star, Johnny Gleeson was Australia’s five eighth for all three Tests against the touring Kiwis in 1967, and Gleeson and Branson were chosen for the Kangaroo tour of Britain and France.
Branson made his Test debut in the Second Test, at White City, London, with Gleeson moving to halfback. Australia had lost the First Test in Leeds, where captain-coach, Reg Gasnier suffered an injury which ruled him out for the rest of the English leg of the tour.
Brisbane Brothers’ stalwart, Peter Gallagher captained Australia in London, and led the Kangaroos to a famous victory. Australia also won the decider, at Swinton, Manchester, with Billy Smith and Gleeson the halves, and Branson on the bench.
Branson played all three Tests in France, marking league legend, Claude Mantoulan in the first in Marseilles, and then dual international, Jean Capdouze in the remaining two Test matches, in Carcassonne and Toulouse. The First Test was a 7-all draw, but the French won the remaining other two games, to claim their first series win over Australia since 1955 (although they had drawn the 1960 series in Australia).
Branson signed with Sydney club, St George on his return, and played six seasons with the Dragons, registering 101 games, scoring 23 tries and kicking five field goals.
Australia hosted the World Cup in 1968 and two five eighths were chosen – Branson and future ‘Immortal’, Bob Fulton. Coach, Harry Bath preferred Branson for the first two matches, against Great Britain and New Zealand, but then opted for Fulton in the match against France at Lang Park in Brisbane.
Fulton retained his spot for the final at the SCG – against France – a match I attended, with fellow members of the North Coast (NSW) under-9 stone team, which had contested the State Carnival at Gosford.
Branson did not play for Australia again until 1971, when he was chosen at five eighth for a one-off Test against the Kiwis on the tour of New Zealand. The Kiwis, with Wellington’s Gary Woollard at five eighth, belted Australia 24-3 at Auckland’s Carlaw Park, and that was the end of Branson’s Test career.
That same year, Branson was five eighth and Billy Smith the halfback for St George in a 16-10 grand final loss to South Sydney at the SCG.
It was one of the great grand finals, and I had the privilege of watching it from the SCG Hill, with other members of the Murwillumbah Brothers’ side, on our end-of-season trip.
Branson finished his career in Wollongong in 1974, and represented Illawarra Division that season. In his 40s, he played rugby union on the South Coast, and from all reports, made fools of men half his age. He also was a fine cricketer.
He was regarded as a top rugby league player, whatever the state of the field, but saved some of his best games for heavy conditions.
His debut match for NSW was on a muddy SCG in 1967, when he marked Johnny White from the Ipswich West End club, with the Blues winning 14-8. The Courier-Mail’s Jack Reardon wrote that Branson and White had an absorbing duel, with honors even.
In his next match for NSW, Branson was on the losing side, with Queensland winning 13-11 at Lang Park, the Maroons first win in inter-state football since 1961.
Reardon rated Branson one of the best players on the field.
“He is strong on his feet and defends well,” Reardon wrote.
Tony Branson died on April 1, 2020 aged 73.
FOOTNOTE: One of the wingers in the 1967 NSW Country side was Gary Dobrich from Murwillumbah Brothers, one of my heroes growing up in the Tweed Valley town. I made my debut for Brothers in 1968, in under-18s, with ‘Dobbo’ still the star of the first grade side. He moved to Brisbane in 1969 and played for Queensland in 1972. 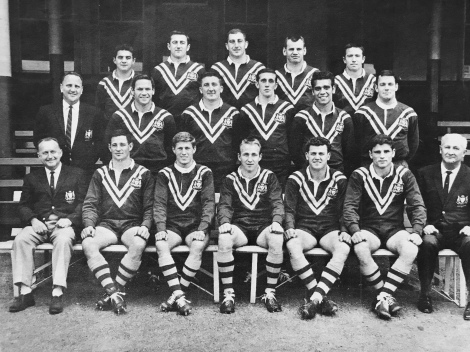