QUEENSLAND’S first ever Kangaroo tour captain, Tom Gorman gave a fascinating insight into the way he believed rugby league should be played, when he wrote the Foreword to Harry Jefferies’ 1955 Year Book.

Gorman, who led the 1929-30 Kangaroos to Britain, also wrote that it was his fervent wish that the 1955 French side would be capable of living up to the standards set by their countrymen, four years earlier.
He said there was unprecedented interest in the looming French tour, largely because France’s approach to the game was entirely different to the approach of Australian, British and New Zealand teams.
“The 1951 side was the most recent side to be converted to the 13-a-side code, and I feel that in that very number, so aptly described in the French language as ‘Rugby Treize’, all the possibilities of our game were unfolded to these newcomers to our code,” Gorman wrote.
“There may be many differences in the rules of the Rugby rivals – Union and League – but there is nothing compared, by removing four players from the field.
“The size of the playing field is the same in both codes, but what extra amount of space for mobility is available in the league game, when the deduction of approximately 20 percent in playing strength is allowed. Though this extra space is there, outside backs, particularly wingers, find they are in the same position in both games, when moving along the touch lines.
“I suggest therefore, that it is elementary that the only satisfactory use to be made of this extra space, is by constantly reversing play from ‘out’ to ‘in’, and by what can be described as ‘down centre running’. Consistency is the paramount idea in this type of play, and when meticulously applied, opening after opening is miraculously unfolded and the defending line is breached. On their last tour of Australia, the Frenchmen employed this type of play.”
Gorman had planned a ‘world tour’ in 1954, including his first trip to Britain since 1930. He was to be a special guest at the British Lions Association annual reunion in Leeds, organised by former QRL secretary, Harry Sunderland, who was based in England. Sunderland covered the 1929-30 Kangaroo tour Australian newspapers.
Harry Jefferies, the chief rugby league writer for Brisbane’s ‘Telegraph’ newspaper, published a year book in the 1950s and ’60s, and for Queenslanders it was the bible of stats on the game, just as David Middleton’s Rugby League Annual is the ‘go-to’ source in the NRL.
In New South Wales in the 1950s and ’60s, E. E. Christensen’s Year Book was the ‘bible’.
Jefferies’ book covered regional competitions, as well as Brisbane club league.
Ayr was highlighted, after claiming the Arch Foley Memorial Shield, with a 18-12 win over Cairns, with Test forward, Kel O’Shea being presented with the Memorial Blazer, donated by Pat Farrelly, as player of the match. Ayr’s captain-coach was former State and Ipswich fullback, Nev Linde. Ayr’s masseur, Jack Williams, was a former Brisbane league player, in the days of Tom Gorman
There was a curious article about the longevity of sportsmen. Cambridge University in England analysed different sports, and found that rugby footballers lived, on average, 69 years, compared with track and field athletes (67), cricketers (68) and rowers (67). What happened to three scores years and 10!
Hotels to place advertisements in the Qld Year book included: Pat Scanlan’s Normanby Hotel; Mrs J Chandler’s Breakfast Creek Hotel; Barry Noonan’s Royal George Hotel; the Criterion Hotel on the Strand, Townsville (proprietor, Mrs E Raleigh); James Martin’s Lands Office Hotel (three beers cold on temperite); Ross Ellison’s Pineapple Hotel; Matt Caldwell’s Kirrabelle Hotel at Coolangatta; Jack Howell’s Australian National Hotel at the Gabba; Bob Grundy’s Club Hotel, Nambour; Bob Cattanach’s Brisbane Hotel and ‘You can’t Trick-em at the Hotel Wickham’ where Frank Moynihan was the licensee.
There also was an ad for Jack Barbouttis’ Billiard Room, in Flinders Street, Townsville.
I have a copy of  E. E. Christensen’s 1954 Year Book, which was given to me by Dave Tancred, a fellow patron of the Lennox Head Hotel in northern New South Wales, way back in 1994.
Player of the Year, according to Christensen, was South Sydney’s Jack Rayner, an ex-servicemen, who first played rugby league at primary school at Coraki in northern New South Wales.
The book included a review of Australia’s 1953 tour of New Zealand. The Kiwis won the Test series 2-1, but Australia won all six provincial games, most notably a 26-4 win over Auckland at Carlaw Park.
“Rough play in the closing stages ended with (Auckland forward) Albert Paul being sent off,” Christensen wrote.
The Australians also had the honor of ‘opening’ a new ground at Whangarei, when they played Northland.
There was an absence of advertisements for pubs in the NSW book. 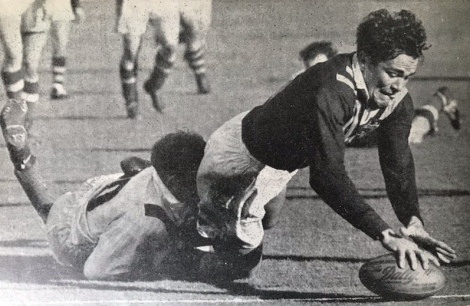 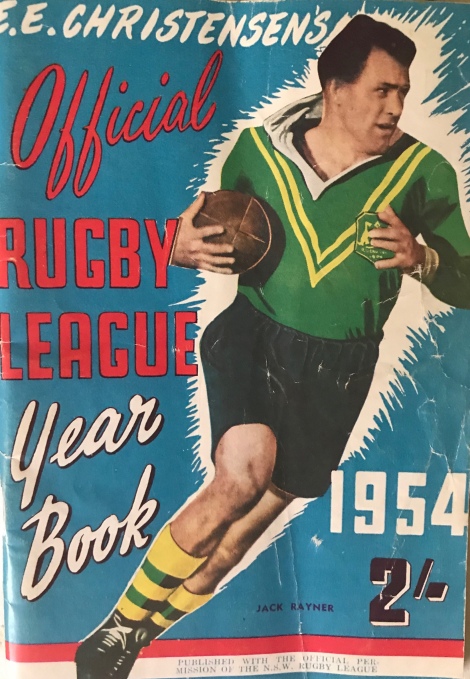