Noel Kelly was never one to mince his words, or hide from the truth.

The former Test rugby league forward, who died on June 14, 2020, aged 84, was blunt in his assessment of the past, and teammates, for that matter.
He didn’t glorify the old days, and had a lot of time for footy, NRL style.
“He watched the game through a young man’s eyes,” Matty Johns commented on FoxSports.
Noel had the honor of representing Australia on three Kangaroo tours of Britain and France – 1959-60; 1963-64 and 1967-68.
The ’67-68 Kangaroos retained the Ashes in Britain, but lost the Test series in France.
In his biography, ‘Hard Man’, (written by Ian Heads), Kelly recalled how French league vice-president, Raymond Forges mounted an angry attack on the tourists, ahead of the First Test in Marseilles, on December 17, 1967.
Forges had been embarrassed and hurt when only seven players from the Kangaroo tour party of 25, fronted for a mayoral reception. (Johnny Gleeson had already returned to Brisbane, after breaking his jaw in England).
“It didn’t get much better,” Kelly recalled. “The farewell dinner after the Third Test in Toulouse, was an unhappy event, with French manager, Joseph Guiraud, abusing our party, and at one stage calling us ‘wild animals’.
“The French team played well in that series. They were ready for us, led by big front rower, George Ailleres. In their ranks, they had some tough customers, including lock, Georges Bonnet (a former soccer player from Perpignan) who was rumored to carry several bullets in his body, legacy of a lover’s tiff.
“I really missed my fanily and my home on that tour. “
When the Australians arrived back in Sydney, they were greeted with the news their tour bonuses were to be docked, to pay for damages incurred at the team’s main English base, the Ilkley Moor Hotel, an establishment Kelly described as “a dreadful old dump”
Former international, Jack Reardon covered the tour for ‘The Courier-Mail’.
“There were no incidents, to my knowledge, concerning our players, to which the League, as the League, could take exception,’ he wrote.
Kelly called that tour ‘the last of its kind’.
“Never since, has an Australian team stayed at an out of the way place, such as Ilkley,” he said. “Subsequently, teams have been housed in good-quality hotels, well paid and well fed.
“Oh yes, we were the last of the breed in ’67. The league learned some lessons, and we players had some fun. In addition we played two of the finest matches in the canon of rugby league Test football (The Second and Third Test wins over Britain, in London and Manchester respectively), before letting the tour slide (in France).”
The Australians weren’t totally lacking in diplomacy in France, with the players expressing a desire to meet Jean Dop, ahead of the First Test in Marseilles. Dop had been one of the heroes of France’s series wins in Australia in 1951 and ’55.
It was a great PR exercise, but might have played a role in Australia’s lack lustre showing in Marseilles, a match which finished 7-all. Bonnet scored France’s only try, with dual rugby international, Pierre Lacaze landing two goals. Fullback, Les Johns scored Australia’s try and also kicked  a field goal. Centre, Graeme Langlands converted Johns’ try.
Dop ran a restaurant, and the Australians liked it so much, they returned several times, and probably ate and drank too much.
France won the Second Test 10-3 in Carcassonne, and the Third Test 16-13 in Toulouse.
Footnote: My coach at Murwillumbah Brothers in 1975, Ron Saddler, was a member of the 1967-68 Kangaroo touring side. Ron was chosen from Easts in Sydney. 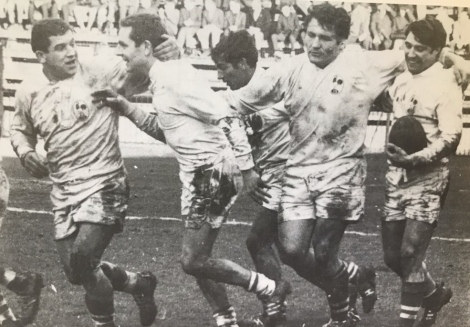 2 French players celebrate a try by former international athlete, Daniel Pellerin (second from left) in the Third Test in Toulouse. Also in the picture are (from left) Christian Sabatie, Guy Andrieu, Georges Ailleres and Jean Capdouze 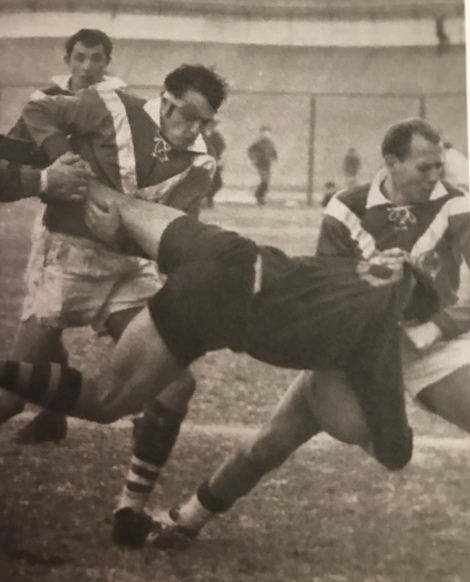 4 Australian players mix with locals on a tour of a winery at Limoux, ahead of the second Test in Carcassonne.