JUNE 1950
Future ‘Immortal’, Clive Churchill was named captain of Australia for the first time, succeeding Keith Froome in the role, for the Test series against the touring Great Britain side.
A star schoolboy five eighth at Marist Brothers, Hamilton in Newcastle, Churchill made his first grade debut for Centrals, Newcastle in 1946. He represented Country Seconds that year and came to the attention of Sydney talent scouts, with Souths’ patron, David Spring visiting the family home, where he signed Churchill for 12 pounds 10 shillings ($25) a game.
Churchill made his Test debut in the second match of the 1948 Trans-Tasman series and went on to play another 36 Tests for his country, 24 as captain.
In 1950, St George centre, Johnny Hawke was favorite for the Test captaincy, but injury ruled him out of contention.
The Courier-Mail’s Jack Reardon wrote that the shock omission from the Australian side was Queensland halfback, Bill Thompson, with the selectors preferring 20-year-old New South Wales’ star, Keith Holman.
Reardon said Holman was a talented player, but inexperienced at this level.
“Probably one reason for his selection is that he will form a club combination with five eighth, Frank Stanmore, also of Wests,” Reardon wrote.
Reardon also criticised the omission of Queensland’s Jack Rooney, who he described as the best tackling front rower in Australia.
“Rooney should have been in the team ahead of Jack Holland, who, in the second half against Great Britain today, was making useless clutches at the heads and shoulders of the strong British forwards, and grabbing air,” Reardon wrote.
Strong words indeed.
The match Reardon was referring to was Britain’s 20-13 win over New South Wales at the Sydney Cricket Ground, which shaped as the final selection trial for the Test side.
The pace of handling skills of the British forwards proved too much for the Blues’ pack.
“The higher rugby league education of the British players was well illustrated,” wrote Reardon. “But halfback, Tommy Bradshaw was Britain’s best. He was a giant in defence and saved at least two tries with great, last ditch tackles on flying winger, Jack Troy. Bradshaw ranks with the best halfbacks Britain has had. He is never still, varies his play beautifully, throws a perfect pass, and is never too tired to go back and support his (Wigan) club mate, (fullback) Martin Ryan.
Britain scored four tries to one, with Wigan winger, Jack Hilton claiming two tries.
Incredibly, a Possibles v Probables match was played before the main event, with the Queensland forwards playing as a pack for the Possibles side, which lost 25-24.
When I say, ‘incredible’, the inter-state games should have been enough of a guide for Test selection.
The crowd for the double header was 70,419, a record for a rugby league match in Australia at the time.
Spectators had begun to form queues before daylight, with many bringing hot drinks in flasks. Fights among spectators in the public stands and on ‘The Hill’ were frequent. One kept flaring up at the same spot, in front of the public stand.
In the build-up to the Test, Reardon noted the difference in training methods between the Australians and British.
He said the Australians, under coach, Vic Hey, trained as a team, but with little variation. The British, under captain Ernest Ward from Bradford Northern, broke into groups, centres and wingers sticking together. It was noticeable also, that the British forwards, from the dummy half position, threw the ball to a forward, and not the scrum half, behind the forwards. The Lions were to play Western Division at Forbes before the Test, but the match was abandoned, when their flight from Sydney could not land at Parkes, because of poor weather.
.In Brisbane club football, Test forward, Eddie Brosnan, took on the role of a human battering ram to lead Brothers to a 18-15 win over Wests at the Gabba, while seven goals from fullback Ray Johnston were instrumental in Norths’ 26-16 win over Valleys at Oxenham Park, Nundah. In the other match, premiers Souths belted Easts 50-15 at Davies Park, West End, with Allan Hungerford scoring three tries. Tom Drysdale crossed twice for Easts.
Norths announced they had lost prop, Les ‘Lulla’ Wilson for the rest of the season, as he taken up a captain-coach role at Quilpie in Western Queensland.
Australia’s Team for the First Test against Britain in 1950: Clive Churchill (South Sydney) (c); Noel Pidding (St George), Doug McRitchie (St George), Keith Middleton (North Sydney), Jack Troy (Newtown); Frank Stanmore (Wests Sydney), Keith Holman (Wests Sydney); Len Cowie (South Sydney, Frank De Belin (Balmain), Alan Thompson (Souths Brisbane), Jack Holland (St George), Kevin Schubert (Manly-Warringah), Duncan Hall (Home Hill). 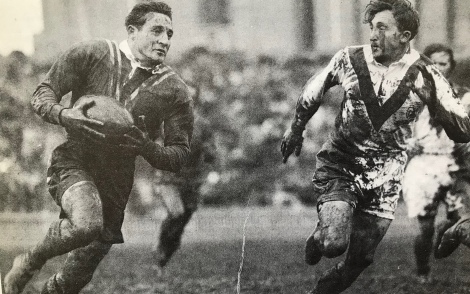