‘Errol Flynn Reserve’ was always going to be part of a walking tour of Hobart, Tasmania for my wife, Marie and I, given she is a distant relation of the Hollywood wild man, who died aged 50 in 1959.
A book written by Errol Flynn, was part of the library at Marie’s parents’, Kevin and Mary Donnelly’s house at 130 Wyrallah Road, Lismore in northern New South Wales. It was while browsing through the book, which from memory was signed by Errol, that Kevin told me of the connections with the Flynn family, the details of which remain sketchy.
Suffice to say, it is a good conversation point.
A few years later, I bought Errol’s autobiography, ‘My Wicked, Wicked Ways’, for $2, at a Book Exchange in Bulcock Street, Caloundra. The book finished with Errol optimistically looking ahead, after having turned 50.
“The second half century looms up, but I don’t feel the night coming on,” he wrote.
Early in the book, he told how his mother’s people were seafaring folk. She had an ancestor named ‘Midshipman Young, who was the chief aide of Fletcher Christian of ‘Mutiny on the Bounty’, and had accompanied Christian to Pitcairn Island.
Errol said his primary interest became the sea, and he listened to anyone who would talk of it. He relished the occasional trips the family made across Bass Strait to Sydney.
“Around the water’s edge, and only there, I was happy,” he wrote. “I used to frolic in the water with such abandon that my father once remarked that human knowledge originally came out of the sea, as well as the human himself, “But you look as if you are going from the land back to the sea”.
Errol was born at Battery Point, Hobart and lived in Duke Street, Sandy Bay.
Marie and I walked ‘the point, the street and the bay’ during our Tasmanian holiday, in January, 2009. It was my first time to Australia’s island state, but Marie had been there as a 16-year-old, on an organised coach tour.
We had started our trip with one night in Hobart, before a four-day, organised walk of Maria Island, off Tasmania’s East Coast (See ‘They Call the Island Maria’).
Back in Hobart, after the walk, we hit the Salamanca Markets on a Saturday morning, with Marie buying a bundle of produce, including eggs from Bruny Island; local cherries; bananas from Mullumbimby; Pirates Bay Rasberry Jam; Country Larder’ chutney; Evandale chilli jam and French relish, ‘pickled in the bay’.
There were lots of excellent buskers doing their stuff, including a little red headed boy, playing the trumpet.
The crew of the ‘Steve Irwin’ anti-whaling vessel were enjoying their achievements, in local bars. They were a little too Gung ho for my liking – a lot of ‘look at moi, look at moi, I’m saving the planet’.
The following day, Marie and I had lunch with a former school mate and neighbour at Bray Park, Murwillumbah, Eleanor Scott (nee Riddell) and her husband, Larry at their North Hobart home (along with their dog, ‘Missie’). Eleanor was a school teacher, and Larry ex-Army. Larry had sons living in Queensland, one at Port Douglas and the other at Currumbin. A keen yachtsman and bush walker, Larry had run Tasmania’s 65km ‘Overland Track’, which is regarded as Australia’s premier alpine track.
Lunch was chicken cacciatore and Middle Eastern Meat Balls.
Eleanor walked back to the city with us, saying hello to a former student, who was wearing a Canterbury-Bankstown rugby league jersey.
Our Murwillumbah High School rugby league jersey was essentially the Canterbury strip. Eleanor’s older brother, David played league for the Firsts, and was a speedy winger. Eleanor was not a great fan of league. Her father, John was a Scotsman, and I imagine he would have been ‘into’ football (soccer).
The next day, Marie and I were to head north west, our first stop Lake St Clair.
More at a future date.
Footnote: Eleanor sadly passed away on December 9, 2016. 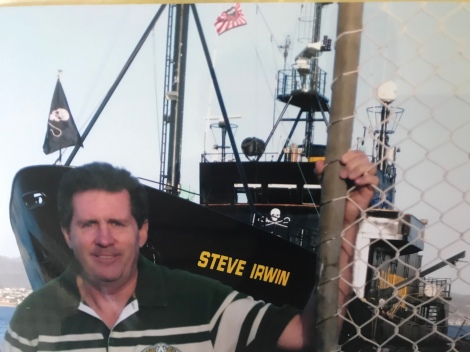 4 Steve Ricketts and the ‘Steve Irwin’ 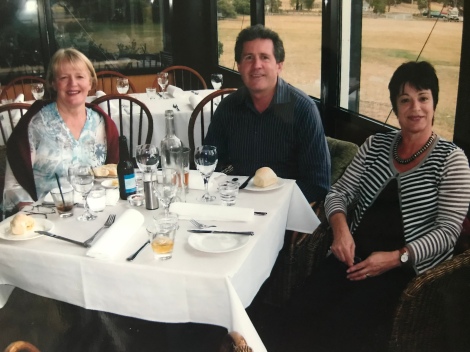 One response to “RELATED TO A SWASHBUCKLER”