AUGUST 1960
Englishman, Bert Holcroft arrived in Brisbane, destined for coaching success in the bush, but not in his one stint in the big time of Sydney football.
Holcroft, a former player with Leigh in England, had seen the Kangaroos play in Britain on their 1959 tour, and although Australia lost the Test series 2-1, he said the Clive Churchill coached side had shocked the Brits out of their ‘smug complacency’.
The then 34-year-old said league people in England believed they could teach Aussies how to play the game.
“We did teach the Australians how to attack, but Australia taught us how to cover defend,” he told ‘The Courier-Mail’. “The Australians were magnificent in cover”.
It was a different game then.
Holcroft, a textile worker by trade, was keen to coach in Sydney, and had held talks with St George, and had been invited by Brisbane Easts to watch a training session.
“I feel that Australian players can learn more about constructive play, particularly between forwards and the halves,” he said.
Holcroft and his wife, a ‘hair stylist’, lived at Auchenflower in Brisbane.
Just before Christmas 1960, my father, Jon drove to Brisbane, with me as his sidekick, to pick-up Bert and his wife, to start a new chapter in their lives, at Murwillumbah, in the Tweed Valley.
Dad, an area manager for the Shell Oil Company, was treasurer of Murwillumbah Brothers, and the club had taken a gamble on this ‘unknown Pom’, as coach for the 1961 Tweed premiership. (The other clubs were Mullumbimby, Cudgen, Tweed Seagulls, Tweed All Blacks and Murwillumbah clubs, Souths and Old Boys).
Brothers had finished last in 1960, under the coaching of former Brisbane Brothers’ player, Don Bullock.
Murwillumbah Brothers had signed a promising indigenous centre from the Riverina, Ron Saddler, and were captained by Country representative fullback, Ken Boyd.
Under Holcroft, Brothers won back-to-back titles in 1961 and ’62, and Saddler and teammate, Cliff Boyd were signed by Sydney Easts (Roosters) for the 1963 season.
Holcroft was appointed Easts coach in 1965, after a stint at Bundaberg. He beat former Test halfback, Wally O’Connell for the job, and succeeded fellow Englishman, Nat Silcock (a captain-coach), who had returned to the UK. Holcroft landed a job as a department manager at Mick Simmons Sports Store, where he did very well as a salesman.
In 1965, the Roosters narrowly avoided the wooden spoon (Canterbury had that dubious honour), and in 1966 the club failed to win a game, with future ‘Super Coach’, Jack Gibson succeeding Holcroft for the 1967 season.
Easts’ 1965 annual report had this to say about Holcroft. “Holcroft is a dedicated rugby league man, with interesting theories.”
Easts’ halfback, Kevin Junee, who went on to tour Britain and France with the Kangaroos in 1967-68, alongside Ron Saddler, said Holcroft’s knowledge of the game was excellent.
“He was full of enthusiasm, with a kind word for everyone,” Junee said. “He was no mug. He was very, very articulate and delivered very well. (But) I always had the feeling with him, that he didn’t really connect – couldn’t get into the psyche of us Aussies at the time. Back then…when it came to rugby league, we were the colonials and it was an accepted thing we hated the Poms. Bert Holcroft was caught up in all that.”
Jack Gibson, a former Easts’ player produced an amazing turnaround, with the Roosters reaching the semi-finals, only to be beaten by Canterbury in the knock-out.
In other news from August, 1960, Brisbane Wests signed Dick Henderson, 30, a forward who had just finished the western season as Quilpie coach. He hoped to be cleared to play for Wests in a fortnight. Henderson had spent three seasons playing in England.
Brisbane Easts’ halfback, Stan Neave was chosen in the Queensland Railways Institute table tennis team to compete in the Australian carnival in Melbourne, from September 14-21. Neave, who came close to playing for Queensland, was part of my Kangaroo Supporters’ Tour in 1994, with his wife, Eleanor. 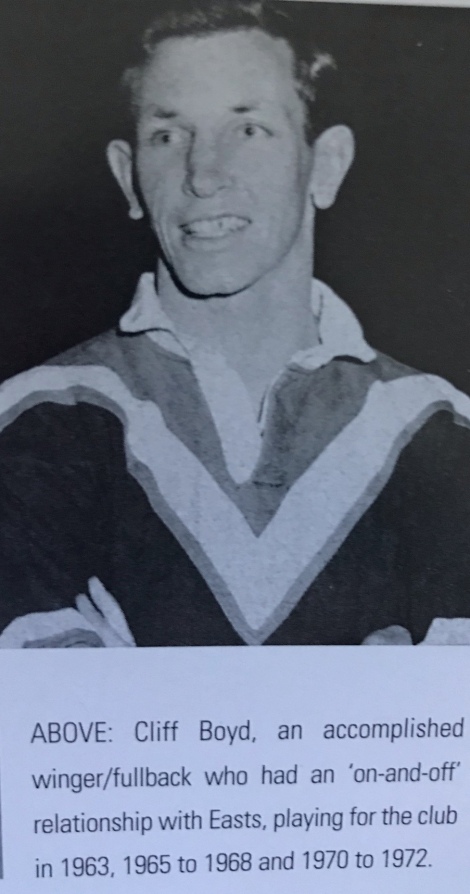