FLASHBACK
SEPTEMBER 1995
Brisbane Broncos and Canberra Raiders produced a match of State of Origin intensity in the first week of the 1995 Australian Rugby League finals series.
The Raiders won the Suncorp Stadium clash 14-8, with hooker, Steve Walters in a great touch, despite a shoulder problem which required pain killing injections before the kick-off. Walters’ duel with his younger brother, Kerrod was one of the match highlights.
Canberra halfback, Ricky Stuart, who kicked two field goals, was the crowd villain, copping plenty of abuse from the terraces, but his combination with five eighth, Laurie Daley was a joy to watch.
The Broncos had their chances in the second half, but referee, Kelvin Jeffes, twice found fault with the home side when they were in good attacking positions.
There was no doubting the Broncos’ commitment in defence, with one front-on effort, close to the try-line, by prop, Glenn Lazarus on lock, Bradley Clyde, particularly memorable.
In court all week, fighting for the right of Super League players to be considered for representative football, Clyde made the Broncos look like court jesters, as he got the Raiders off to an ideal start to the second half. Running onto a Daley pass, Clyde got outside Darren Smith, outpacing the Broncos’ centre and the cover of fullback, Julian O’Neill in a graceful, 50-metre run to the line. David Furner landed the sideline conversion, for Canberra to lead 13-6. The Raiders had led 7-6 at halftime, thanks to one of Stuart’s field goals.
Broncos’ halfback, Allan Langer scored his side’s try, but limped from the field after 45 minutes, and did not return. Langer declined to use the club’s hyperbaric chamber as part of his recovery process, because he has a fear of confined spaces.
“I think the fact I kept being locked in the cupboard by my brothers, as a kid, has a lot to do with it,” he joked.
Teenage star, Darren Lockyer did a great job off the bench for Langer, and did not look overawed, even though he had started the season in colts.
“He was as white as a sheet, and couldn’t remember any part of the game,” said Lazarus.
I covered the match for News Ltd, and wrote that the early pace of the game was like nothing seen at Suncorp all season, even at Test and Origin level. “There were errors, but there was a fluency and expectancy about it, befitting the occasion,” I commented in my story.
Lazarus said the match was as fast as Origin, and rated it a great advertisement for the planned Super League competition. The Broncos and Raiders were two of the clubs signed by the rebel league, which hoped to get up and running in 1996.
“If that’s any game to go by, Super League should be pretty successful,” Lazarus said.
The Test prop paid tribute to unsung forwards, Brett Green and Steele Retchless, who got their chance because of the club’s long injury list, which included Andrew Gee, Peter Ryan and Terry Matterson, with Matterson lasting only 13 minutes, after he strained a hamstring in the warm-up.
ARL general manager, John Quayle and his Super League counterpart, John Ribot, were at Suncorp for the match, but not in the same box.
In the other finals, Newcastle defeated Norths 20-10 at Parramatta Stadium; Canterbury defeated St George 12-8 and Manly accounted for Cronulla 24-20, the latter two matches played at the Sydney Football Stadium.
The crowd was 40,000 at Suncorp and attendances at the two SFS games were 27,000 and 33,000 respectively, bringing smiles to the faces of ARL officials, after only 14,000 turned up at Parramatta Stadium.
In Brisbane’s XXXX Cup competition, Wynnum-Manly defeated Brothers 26-16 in the preliminary final with centre, Ricky Taylor scoring two tries, as well as making a magnificent try saving tackle on Richard Ackerman.
Taylor, who had been chosen in the Queensland Residents’ side to tour Papua New Guinea, was pushed for man of the match honors by second rower, Kent Larsen. Wynnum coach, Peter Donkin said Taylor’s best position was lock, but he and Greg Street had done a wonderful job in the centres.
Wynnum were to play Easts in the grand final, with the Tigers having thrashed Wynnum in the major semi-final. (Wynnum got revenge over Easts, winning the decider). 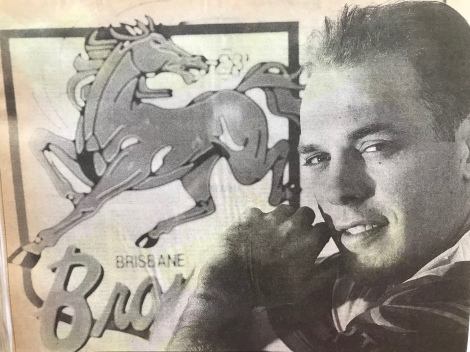