FLASHBACK
SEPTEMBER 1955
Valleys were Brisbane’s best team in 1955 and Brothers the cleanest.
So reported the ‘Sunday Truth’ newspaper after Valleys beat Brothers 17-7 in the grand final at the Gabba, in front of a 14,000 plus crowd, to become the first undefeated premiers in 33 years.
Brothers may have been ‘clean’, but they never took a backward step, as a Valleys’ player found out after he stiff armed Brothers’ young centre, Sam Tocchini. Brothers’ Test forward, Brian Davies, The Courier-Mail’s Best and Fairest Player of the Year, dished out his own form of justice, a right hook. The felled player was not named in the match report.
The Sunday-Mail report highlighted the performance of 20-year-old-electrician, Mick Mulgrew, who had been in and out of first grade all season.
Mulgrew only got his chance when first choice winger, Garry Barnett was ruled out through injury.
In breath taking dashes, Mulgrew scored two tries, the second of which, a 75 metre effort, proved the turning point of the match.
The Courier-Mail’s Jack Reardon wrote that Brothers were glorious in defeat, tackling magnificently, but failing to respect the ball, the most costly example a loose pass from Vince Hore, which was snapped up by Valleys’ centre, Ken McCaffery, who raced 70 metres to score.
Valleys’ forward, Norm McFadden relished the rough stuff, and helped lay the platform for the Diehards’ exciting backline, which included State fullback, Norm Pope, who played despite a stint in hospital earlier in the week with suspected appendicitis.
Brothers had qualified for the grand final with a glorious 21-15 win over Wests at the Exhibition grounds, in a match rated by Reardon as the best of the season.
Wests had had hooker, Johnny Flynn sent off 10 minutes from the end, by referee, Col Wright, on an abusive language charge. Nev Kelly refereed the grand final. Wests also went into the match without Test centre, Alex Watson (fractured jaw).
Watson has been injured in Wests’ 20-14 loss to Valleys in the major semi-final. The circumstances of his injury causing uproar in Paddington and beyond.
Wests’ president, Tom Purtell wrote a letter to ‘The Courier-Mail’, saying that the stiff-arm tackle which knocked Watson unconscious, must have horrified all lovers of sport.
“The tackle was made after Watson passed the ball to (George) Vautin (father of ‘Fatty’), and was so late it escaped the attention of many of those present, including the referee and touch judges,” Purtell wrote. “The circumstances leave no doubt in spectators’ minds what actually happened, as the Valley player concerned (Norm Pope) has been involved in similar incidents previously.”
Brothers, with future Broncos’ chairman, Barry Maranta at fullback, beat Easts 32-12 in the reserve grade grand final. Future Brisbane super coach, Bob Bax was Brothers’ halfback.
In Port Moresby, Papua defeated New Guinea 35-13 in the annual inter-territory game.
In England, Warrington signed Wigan 16-year-old, Jack Edwards for 1,000 pounds. Wigan had previously offered Edwards 800 pounds, but Warrington pounced, on the youngster’s 16th birthday, while the family was holidaying at Blackpool.
Jack Edwards son is Shaun Edwards, who played 36 Tests for Great Britain between 1985 and 1994, and was signed by Wigan the day he turned 17. Jack never played a Test, although he starred for Warrington against the touring Australian side in 1963. Three years later his career was over, as a result of a spinal injury in a club match. I interviewed Shaun about his dad, during Great Britain’s tour of Australia in 1992. 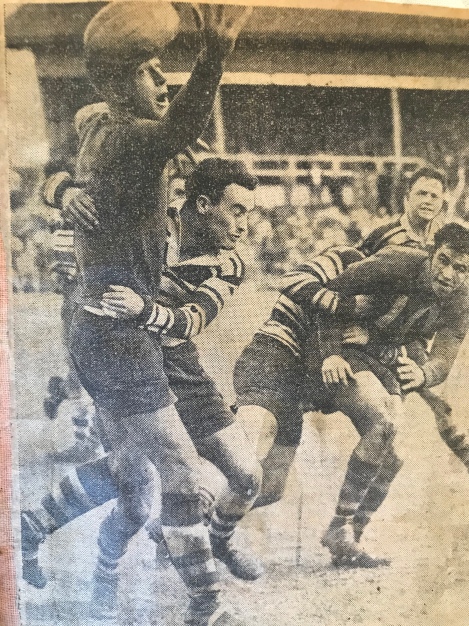 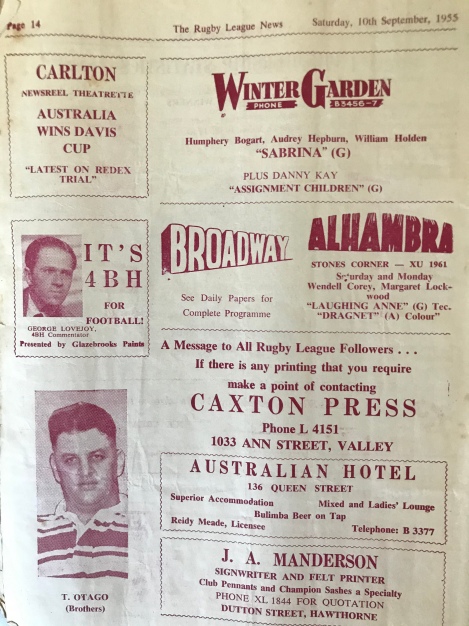 4 Jack Edwards and his son, Shaun.