FLASHBACK
SEPTEMBER 2005
The Rugby League, Rugby Union and Journalistic communities were mourning the loss of Harry Jefferies, who died on September 6, 2005, aged 83.
Jefferies was a long serving rugby league journalist with Brisbane’s Telegraph newspaper, and also produced a year book, which was the ‘bible’ for Queensland league fans and players.
Many people were unaware that Harry was a prominent rugby union player, who represented his state in the 15-man code, from Toowoomba, first in 1941, and then again in 1946.
He first came to light, playing for Toowoomba against Brisbane in an inter-city rugby union match in 1941. Jefferies, playing at halfback, was the star in a Downs’ outfit which lost only 7-5 to a city side which boasted future Wallaby, Kevin Bourke at half.
Jefferies was subsequently chosen in the Queensland team to play Combined Services, who were captained by Bill McLean and included future ‘Wallaby’, Bob McMaster in the pack. The State side included Alan Livermore, whose son, Ross would go on to become managing director of the Queensland Rugby League, taking up his post in 1981, the year Jefferies retired as chief league writer for the Telegraph.
Queensland beat Combined Services 31-14.
Jefferies served with the 25th Battalion in World War II, and on his return from active service, was selected for Queensland again, this time for a trip to New South Wales, where Queensland played a 9-all draw with New England, at Armidale.
He started his journalistic career soon after.
Jefferies’ Year Book was first published in the 1950s, with the foreword written by the likes of former Test halfback, Duncan Thompson, and Australian Rugby League Board of Control chairman, ‘Jersey’ Flegg.
“Not since Mick Fihelly (‘Red Cap’) passed away in 1926, have we recoded the history of Queensland football,” Thompson wrote in the foreword to the 1956 book. “To Harry Jefferies, a journalist and rugby inter-state player, our congratulations and thanks”.
In 1981, Harry was ghost writer for former State forward, Des Morris in Morris’s newspaper column in the ‘Telegraph’. ‘DJ’ was captain-coach of Wynnum-Manly at the time. Harry finished his distinguished journalistic career by covering that season’s grand final, between Souths and Redcliffe, with Souths winning on the bell, thanks to a try by Mick Reardon.
That was my first season as a full-time league writer, l and I succeeded Harry as chief league writer, after that match. He knew the game backwards, and wasn’t afraid to speak his mind.
For instance, in 1981, he chastised Souths for playing (future Test centre), Mal Meninga in the pack. “He is being wasted, and is lost at second row,” Harry wrote.
I met some great characters through Harry, one of them burly boxing promoter, Reg Layton, a former boxer himself. Reg came into the office one day to see Harry, and gave him a huge pat on the back, when Harry was least expecting it, sending Harry face first into the type writer keyboard. Harry had to go home, injured.
I was covering the Dally M Awards at Sydney’s Town Hall, with colleague, Barry Dick, when news broke of Harry’s passing. (Barry and I had attended the Courier-Mail Best and Fairest Awards the night before the Dally’s).
A private family cremation – at Harry’s request – was held on September 9, 2005.
Footnote: I stayed with Harry’s son, Rod in Singapore in 1982, on my return from covering the Kangaroos’ tour of Britain and France. 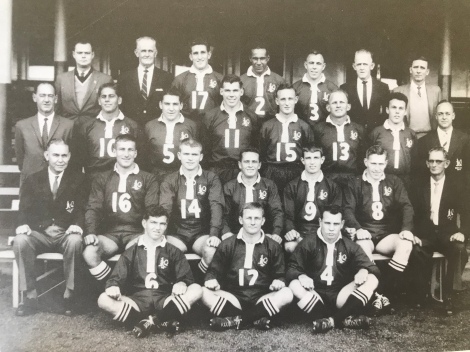 1 Harry Jefferies (far right, back row) with the Queensland Rugby League side in Sydney in 1961 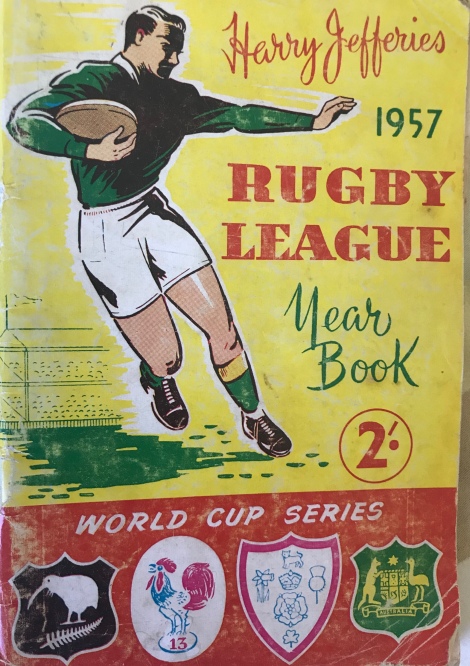 3 One of Harry Jefferies’ rugby union rivals, Kevin Bourke, playing for Queensland against the All Blacks at the Exhibition Grounds in 1947

4 A joint by-line – Harry Jefferies and Steve Ricketts – on a story previewing the 1981 Brisbane Grand final.