DIARY OF A RETIRED RUGBY LEAGUE WRITER
WEEK 17 2020
MONDAY, APRIL 27
Former Ipswich representative forward, Stu Pankoff, one of the grand old men of rugby league, turns 91. Stu played for Ipswich against Great Britain in 1950, and against the American All Stars in 1953. In Ipswich’s gutsy 18-13 loss to Britain, Pankoff and Harry Murphy came to grips in one of the many fierce exchanges of the match. Murphy, who died aged, 60, has a bar named after him, back in Wakefield, West Yorkshire. They should name something after Stu.
‘Radio Sport’ in New Zealand is to wind up, a victim of the virus. I was interviewed by Radio Sport a number of times, during my rugby league writing days.
QRL website carries a lovely story about State of Origin star, Dane Gagai, who says his father, Ray is his hero. Ray played for the Broncos, but spent most of his career in Mackay.
TUESDAY, APRIL 28
Charleville area manager for indigenous legal services, Laurie Parker sends me a 1930s photograph of Main Street, Murwillumbah, knowing that the Tweed Valley town is close to my heart. Laurie grew up at Labrador on the Gold Coast. He recalls seeing former Australian hooker, Ron Turner play rugby league for Nerang Roosters against Southport Tigers at Owen Park, Southport. Ron was future Test centre, Peter Jackson’s first senior coach – at Runaway Bay. Laurie met Turner at Charleville in 2018.
WEDNESDAY, APRIL 29
Quest Newspapers sports editor, Andrew Dawson asks for my rugby league cult heroes. Off the top of my head, I come up with ‘TV Ted’ Ellery, Noel ‘Chipsy’ Harrington and Richo Hill. Ellery was everyone’s favourite in the Western Division (New South Wales Country) side which beat Penrith in the final of the inaugural (knock-out) televised Amco Cup competition in 1974. I remember at Murwillumbah, my mates and I couldn’t wait for Ted to come off the bench and to cause havoc. We all reckoned that if Ted could make it, we were a chance. ‘Chipsy’ and Richo were indigenous stars, ‘Chipsy’ for Brisbane Brothers in the 1970s, and Richo for Brisbane Souths in the 1980s. ‘Chipsy’ was man of the match in Brothers’ win over Penrith in a first round Amco Cup match at Lang Park in 1976. He was a forward capable of steam rolling any defence, but also knew his way to the judiciary room. Unfortunately, Noel is no longer with us, having succumbed to the effects of diabetes at a young age. Richo was a skilful ball player, a natural. His brother, Floyd was a prolific try scoring winger.
Captain Cook landed in Botany Bay on this day 250 years ago. A great man. That is not a political statement.
FRIDAY, MAY 1
Out of the blue, I get a phone call from my former Brisbane Brothers’ teammate, Mark Thomas (who played for Australia in 1977) and my fellow Brisbane Men of League committee member, Reg Green. Mark, who works for a sports equipment company, ran into Reg at Ashgrove State School, where Reg is a groundsman. They wanted to talk footy, from the 1970s and ’80s. Mark has worked for the same sports company since 1984. He pays tribute to the influence of his centre partner, Murray Schultz, in Mark’s debut season for Brothers – 1976. I was five eighth, alongside Mark and Murray, in a number of reserve grade matches that year.
SATURDAY, MAY 2
FREEDOM: (Sort of). As of today, we are allowed to travel 50km from home, after what seemed like months of lock-down, because of Corona. You beauty! Marie and I jump at the chance, travelling to North Pine Dam, after a drive through the lakeside ‘suburb’ of Whiteside. We enjoy a picnic lunch at McGavin View Park, and then do a small bush walk. Along the way, we see several pelicans (some on the water as well); one hawk and lots of butterflies and fire flies. It is lovely to be at one with nature. Home via Mt Samson and Samford, stopping to buy horse poo on the way (for the garden).
Fellow QRL History committee member and Ned Kelly buff, Paul Hayes says Australian actor, John Jarrett is making a new movie, about a Down Syndrome boy. Evidently Mel Gibson’s production company, Icon will help.
SUNDAY, MAY 3
Marie and I explore Balmoral Park and cemetery, in Brisbane’s east. The first grave I see is that of a fellow called Lawson, a camalier, who died in 1942, aged 63. He had served with the (Australian) Imperial Camel Corps in Sinai and Palestine. There is a self-guided Anzac walk in the graveyard, which is a lovely touch.
Lots of interesting phone calls to Macca’s show on the ABC. A ‘mullet chaser’ from Port Macquarie says the quality of mullet this year will be good, because of the drought. He phoned Macca 34 years ago, from Iluka. I remember my grandfather, Bill Ricketts from Maclean, telling the story of a mullet spotter, who was stationed on the roof of a building at Brooms Head, waiting to alert the fisherman that a giant school of the fish were on their way. Well, when he saw mullet coming, he was so excited, he forgot he was on a roof, and ran off. He survived.
An Inverell farmer – Ted – tells Macca that 120 goats have been stolen from his (Elsemere) property potty calves too. Talk about low lifes.
A bushie says he had a lot of stray cats turn up at his property and he tried to teach them to swim. A few failed, he said. Oh Dear! A stock and station agent phones, when he ‘hits a bit of reception’ near Richmond in Queensland, to report that there is a Corona Creek near Adavale.
A Western Australia v Victoria rugby league match is on NITV, and the standard is surprisingly high. The football, I mean. Not the camerawork.
Movies Marie and I watched during the week included: Blindside, Hotel Mumbai, Galveston, Widows, The Keeper. All good.
Marie also watched ‘1971’.

1 Cronulla’s 1973 grand final side. Ron Turner is fourth from the left, in the backrow 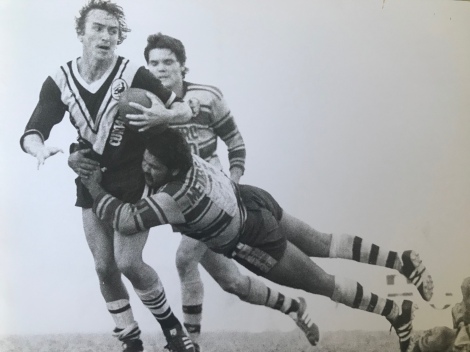 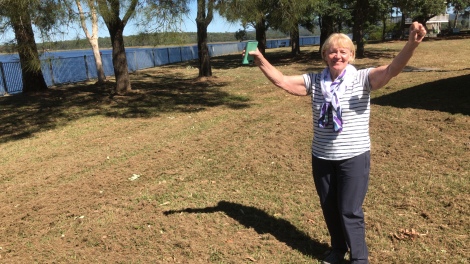