“Is there a Lion on the Loose?’ English cricket commentator, David Lloyd was heard to say, as he walked around Wellington’s impressive harbour, a few years back, his comment prompted by the sight of so many joggers.
“If this was Manchester, people would be asking where the bomb went off,” Lloyd said.
Lloyd’s observation was understandable, because people in New Zealand seem so much more fitness conscious than in England, and for that matter, Australia. It might be my imagination, but in all my visits to New Zealand, I have not seen that many obese people, certainly not compared with the UK and Australia.
My wife, Marie and I were impressed with the number people out walking, jogging, running fast and even swimming, as we walked around Wellington Harbor on February 18, 2013, after flying Virgin from Brisbane.
Our aircraft was small, with no television screens. There were great views of the Marlborough Sounds and the coast near Wellington City, as we flew into New Zealand’s capital.
It was a warm day and kids were jumping into the harbor. No sharks, obviously.
Two drinks at Cambridge Pub, something of a home base for University rugby, where an old bloke tried to flog ‘genuine jade’ to us.
Wellington is a rugby town, but there are strong links with league, in particular the fact A H Baskerville, a young postal worker from Wellington, devised the first New Zealand tour to England and Wales, in 1907-08. He toured as secretary/player. Had he not died of pneumonia in Australia, on the way home, he might have (in the words of historian, Geoffrey Moorhouse), “become more completely the father of New Zealand Rugby League”.
He is buried in the Karori Cemetery, Wellington, a place I did not get to visit during our 2013 holiday.
On our second day in Wellington, Marie and I walked past Victoria Uni to the Botanic Gardens, where they were setting up for ‘Shakespeare in the Park’ – Antony and Cleopatra. Next, we walked through the historic suburb of Thorndon, where we enjoyed a drink at the Sprig and Fern Tavern, which boasted a huge range of beers. Our barmaid was from Tonbridge in Kent, England, a place where Marie and I were to stay in 2018, before attending the Rugby League Challenge Cup final at Wembley (See Diary of a Retired Rugby League Writer, Week 34, 2018).
There were two cruise ships at Aotea Quay, something taken for granted back in pre-Covid times.
A lass from southern Italy looked after us at the Black Harp Tapas Bar, where the manager was German.
Melbourne Storm, coached by Craig Bellamy, were in England ahead of their World Club Challenge match against the Brian McDermott coached Leeds side at Headingley, and had an opposed session with Halifax.
Those 1907-08 Kiwis, known as the All Golds, lost to both Leeds and Halifax, but won the Test series 2-1 against Great Britain, but lost other international matches against England and Wales. All up they won 19 matches, lost 14 and drew two. A by-product of the tour was that many ‘Northern Union’ (as rugby league was first called) clubs, more than doubled their memberships.
The captain of the side was Hercules Wright from Wellington, with the vice-captain, George W Smith from Auckland, who subsequently signed for Oldham.
I wonder how many people in Wellington are aware of the city’s strong links to the birth of rugby league.
After two nights in the windy city, Marie and I were to catch the ferry to Picton, on the South Island, ahead of a three day walk of the Marlborough Sounds. (More at later date). 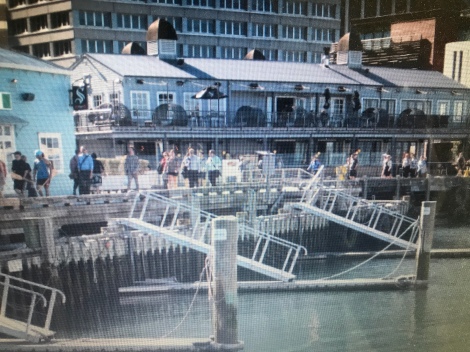 3 Wellington people on the move

4 Members of the 1935 Kangaroo touring party visit A H Baskerville’s grave in Wellington.

One response to “THE HOME OF JOGGING”