The Brisbane Broncos’ camp cried foul after rookie prop, Shane Webcke  was sickened by a front-on tackle by Penrith hooker, Danny Farrar in a Super League trial, at Port Moresby’s Sir Hubert Murray Stadium.
Broncos’ coach, Wayne Bennett and skipper, Allan Langer said they believed the tackle was high, with Webcke needing stitches to a mouth wound. The Darling Downs’ product was forced to miss the post-game reception, and a teammate was assigned to keep an eye on him, back at the team hotel.
Webcke was down for about 90 seconds after the tackle, and had to be supported by two teammates, as he left the field.
Team trainer, Steve Nance said Webcke had no recollection of the incident and had been ill on the coach trip from the stadium.
Penrith coach, Royce Simmons said he had a good view of the incident and believed Webcke had slipped, coming into the tackle.
Brisbane defeated Penrith 28-4, scoring five tries to one, with Kevin Walters having a hand in three tries, and scoring one himself.
Around 16,000 fans crammed into the stadium, with people watching from trees, rooftops and hillside roads. When the Broncos’ team bus arrived at the ground, police used batons to keep back the fans.
Near fulltime, thousands of fans encroached onto the field, only to be forced behind the fence by riot police carrying batons and tear gas weapons, which fortunately, they did not have to use.
Langer carried an injury into the match, and admitted he should have stood down, but did not want to disappoint the fans.
“I didn’t realise the level of support for ‘Alfie’ (Langer) here,” said Bennett. “They were running 50 metres just to touch him”.
The middle aged ‘sand boy’, was the envy of the crowd, because every time he ran onto the field, he shook hands with, or embraced players from both sides.
* Future Broncos’ coach, Anthony Siebold was one of the stars of Wests’ 18-10 win over Souths in a QRL pre-season clash at Purtell Park, Bardon. Others to impress for the Panthers included Valleys’ signing Alan Wieland and Cam Roper. Wests’ new coach, Wayne Treleaven promised his side would play entertaining football in 1996. Brisbane premiers, Wynnum-Manly defeated Brothers 14-12 at Kougari Oval. Wynnum fielded a new look side, with winger, Darren Filewood the only player from the 1995 grand final triumph.
*In England, former Kiwi Test prop, Kevin Tamati was appointed coach of Chorley Chieftans, replacing former British Test forward, Bob Eccles. Britain’s 1968 World Cup skipper, Welshman, Bev Risman was appointed London Broncos’ director of development.
Huddersfield signed Leeds’ skipper, Garry Schofield for a club record 135,000 pounds.
And another Great Britain legend, Ellery Hanley announced he would join the Sydney Tigers (Balmain) in the Australian Rugby League premiership.
Up until late February, there were two elite competitions in the pipeline in Australian – the ARL’s Optus Cup and Super League’s Telstra Premiership. But, when the Federal Court ruled in favour of the ARL, Super League had to shelve its plans, and their clubs continued in the ARL competition.
Britain was part of the Super League empire, but the ARL had raided its playing ranks, with Hanley one of those accepting terms from the Australian establishment.
Even in PNG, where the Broncos played Penrith, there was a divide, with the Port Moresby League remaining loyal to the ARL, while the rest of the country sided with Super League.
The day after the Broncos and Penrith met, Sydney club, Wests played the Port Moresby Vipers, which had entered the inaugural Queensland Cup. Lloyd Robson Oval was the traditional HQ of Rugby League in Port Moresby, but the Broncos and Penrith were not allowed to play there.
It was a tumultuous time, with rugby union preparing for its first professional season, the 15-man code having been dragged kicking and screaming into the professional age, because of the Super League war, with Super League having raided union ranks in New Zealand, the Pacific, South Africa and the UK.
Recently appointed Australian Rugby union chief executive, South African, Andy Marinos was one of those recruited, and was assigned to Canterbury Bankstown, where he played one first grade match in 1996. He returned to rugby union, and represented Wales from the Newport club.
I covered the Broncos’ trip to PNG in 1996, and aside from the game, I remember the wonderful hospitality of the locals, and a late night at the Broncos’ team hotel, debating the merits of Super League with Broncos’ CEO, Shane Edwards. We agreed to disagree. 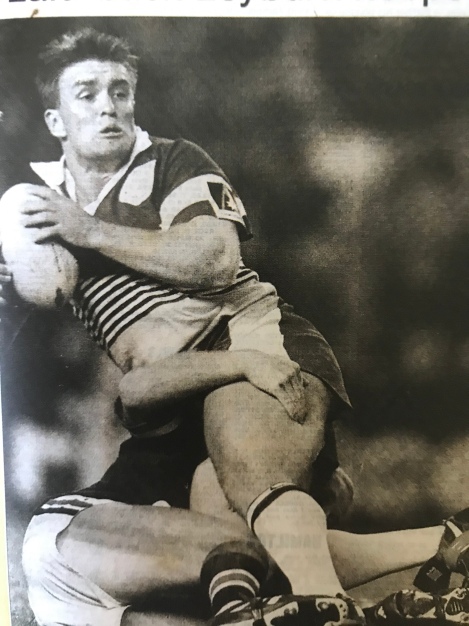